I am Charlie Alberto. I am writing to make a serious complaint about the “Pure It” water purifier. I am deceived along with my two colleagues because of the false advertisement. The TV and website advertisements both were totally wrong. The company gave a deal that 6 liters’ water purifier worth just $100 instead of $300 with a free Microfiber Mesh for cleanup and it has 5 years’ warranty. We ordered it and received after 2 days. After opening there was neither a microfiber mesh nor a warranty card inside. The booklet said that it will start working in 24 hours. It is not functioning since the day we set it. We are simply deceived. We want a replacement of the “Pure it” free of charge. And the microfibers mesh along with the warranty card as per the deal. I am sending you the copies of the receipts and other necessary information. I would strongly request you to stop deceiving the consumers. 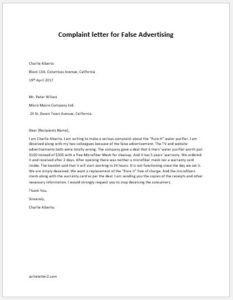