How to Write Letter to the Editor of a Newspaper

Letters to the editors are written due to the following reasons:

INSTRUCTIONS on how to write such letters:

Below there are two samples of letters to the editor which are labeled as well.

SUBJECT: The Curse of Begging and Its Effects on Society

Through the columns of your esteemed paper, I want to invite the attention of authorities, leaders, rulers and public to the troubles and problems caused by begging in our society.

Begging is a curse which encourages many other people in the society to become beggars. It is like a virus which is spreading rapidly in our society. Every time you come out of your house you are surrounded by a crowd of beggars and if you give alms to one of them then it becomes impossible for you to leave other go empty handed. Every corner of our roads is crowded with their large number which makes the flow of traffic obstructive as well. Some beggars can become criminals when they find the chance of stealing and cheating. Some beggar gangs cut off the limbs of lifted children and make sit at busy street corners to beg.

Begging can be eradicated to a great extent if the following measures are taken by the authorities: 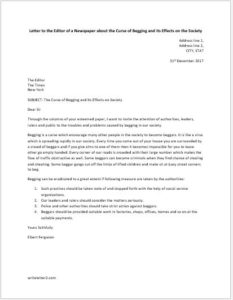 Letter to the Editor of a Newspaper about Curse of Begging

Subject: Frequent Breakdown of Electricity in Our Area.

Through the columns of your esteemed paper, I want to draw the attention of the concerned authorities towards the frequent breakdown of electricity in my locality.

The electricity goes off and on for hours. On an average, we have the benefit of electricity for just two or three hours a day. This is causing great inconvenience to the residents. Moreover, it is the time for examinations and the children are affected the most. The various complaints by the member of the colony association have fallen on deaf ears. Life of common man is affected at its worst both domestically and economically. Besides, we must pay heavy bills as well which are above the average expenses on a layman.

The electricity authorities are requested to take immediate measures to repair the wiring defects which cause these breakdowns. Otherwise, the situation will become worse day by day and may give vent to crimes like stealing of electricity etc.

It will be greatly appreciated if the electricity authorities act immediately so that we can have peace and quiet in our lives. 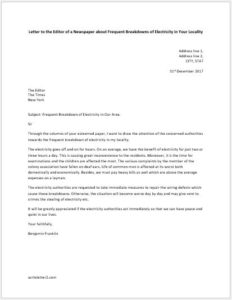