Warning Letter to Employee for Harassment

Dear Mr. Alexie, I am writing this letter as a last warning to you about the allegations that have been imposed upon you by many of the employees of our office and this leaves no room for you now to explain your point of view further at this time falsities have reached to its extreme. You had already been excluded from the office you were working in before coming to my office but knowing all this I appointed you in a very good position here so may it will bring a change in your behavior, but it left no stone unturned.

I have been receiving your insulting behavior with employees for a long time and I had warned you already to behave well but yesterday’s incident put me in shock. When all others had gone to their homes you tried to harass Ms. Elizabeth sexually. Thank God, Mr. George was there at that time and he had forgotten his car keys on his table in the office and came back to take them where he saw that you were harassing Ms. Elizabeth sexually.

He recorded the video of that incident and showed it to me today’s morning and I was in shock after seeing the video and all this has made it very difficult for them to work with you.

As you know that our company is known well for treating its employees very well and we do not want to defame its reputation because of the employees like you. So, you have only these options now left to excuse Ms. Elizabeth or leave the office as soon as possible. To avoid further happenings of this kind in the future I warn you to act upon what has told you. 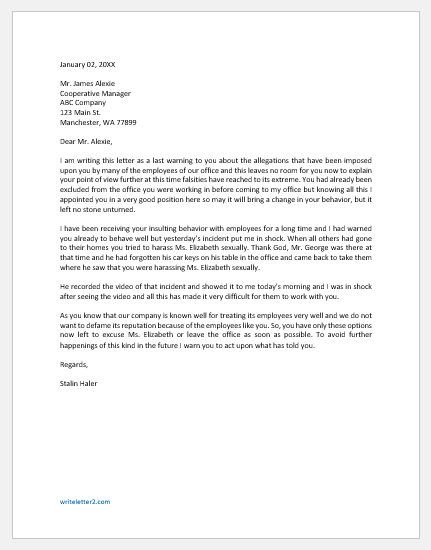 I am sending you this letter to make you aware of the situation that happened because of you and made the atmosphere of the institute very stressed and unpleasant. I always considered you a man of good qualities who possesses all the attributes that an ideal man to live with should have but after listening to the incident that took place between you and Ms. Jane have put me into great shock and from the day, I have heard about it I am not focusing on my work properly.

Mr. Vladimir, you are working with us for the last ten years but since last year I had been receiving complaints about your misconduct with your colleagues and students as well. I told you many times by giving hint to you that you should be polite in your behavior with others, but you did not focus on what I said to you.

The incident that took place last week shook me completely. You were also defending yourself at that time that you have done nothing, but security cameras caught all that you had done, and it was very shameful for me by watching all this with my college staff yesterday in the meeting hall.

Ms. Jane is a very prestigious and respectable lady of our college and her respect is the respect of the institute, she herself came to me after this incident. She told me the entire story that how you touched her private parts and tried to rape her. This act of yours has defamed your position in everyone’s eye.  So, this letter is a warning to you that if you do not want to lose your position as cooperating manager, you should have to change your behavior with staff and to apologize to Ms. Jane as well. Otherwise, I am free to exclude you out from your position. Hope you will not do this next time. 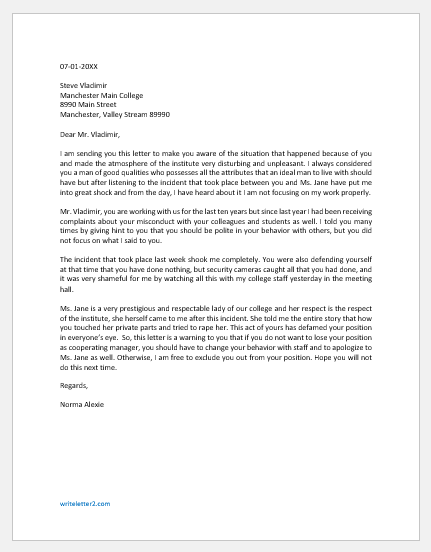 I am writing this letter to you based on falsities that have been imposed upon you by many of the employees of the company. As far as I know, you were a faithful employee in the company for the last seven years and the time that you spent with all of us was a good one but due to recent allegations that are against you, have shaken me totally. You have tried to distort the peace of mind of all of us which is very alarming.

The purpose of writing this letter is aware you as Ms. Austen the head of the supervising department have registered a complaint against you that you have tried to harass her.

After this incident, she immediately wants a transfer to another branch of our company in Manchester as she is not feeling comfortable working with our company and she claims that working with you now causes trouble for her and she is not focusing on the work properly. She has warned me to exclude you out from the company. So, this letter is a warning to you that you should change your attitude towards her and other employees as well. 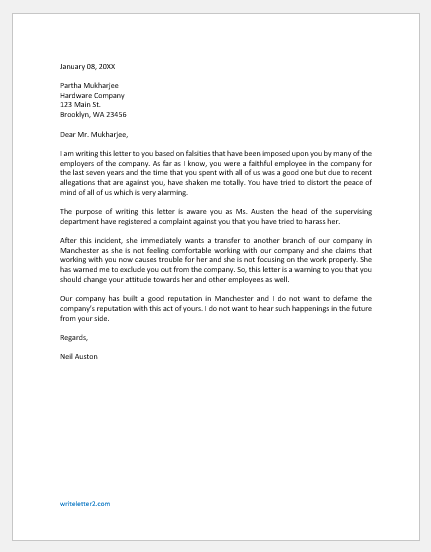