Re. Notification Regarding Temporary Hiring Freeze due to Instability in Business and Economic Ballgame w.r.t Ad. No. 3490/D780

Dear Candidates, I am writing this letter to notify you about the temporary closure of the hiring with reference to the ad. No. 3490/D780. The hiring was opened on 20th April 20XX to fill the vacant position of Assistant Finance Manager and Assistant Manager in the Manufacturing Department. The ad was posted on social media (Instagram and Facebook pages of STEPS Industries) on 20th April 20XX and applications were invited from the eligible candidates who could perform the managerial tasks mentioned in the ad.

The ad was posted by the Human Resources Department without any intrusion of the Board of Directors and Accounts Department. Later, the scrutiny committee analyzed that the industry is not in the position of hiring new employees because of the sudden economic downturn in the finance of the industry.

The industry has been facing many difficulties and troubles in maintaining the operations for net profit that went very low. Therefore, in the meeting of the board of directors, it has been decided that the hiring shall be frozen for an uncertain period.

This instituted hiring freeze has been by the consultation with the Department of Accounts and Auditing. Due to the Pandemic, the industry has seen a huge loss in its imports and therefore, it has become highly troublesome to hire new employees. The implemented lockdown which is still in effect since March 20XX has kneeled and debilitated the company.

We are extremely sorry for the trouble and inconvenience caused to you. This is the only way by which we can avoid layoff in the company. We hope that with strong teamwork and strenuous performance of the workers can resolve this matter and bring the company back to its eminence and prestige.

We extend our thanks to you for cooperating with us. We shall let you know about the resumption of hiring once the situation gets back to normal. You can contact us at +[X] or email us at [EMAIL]. 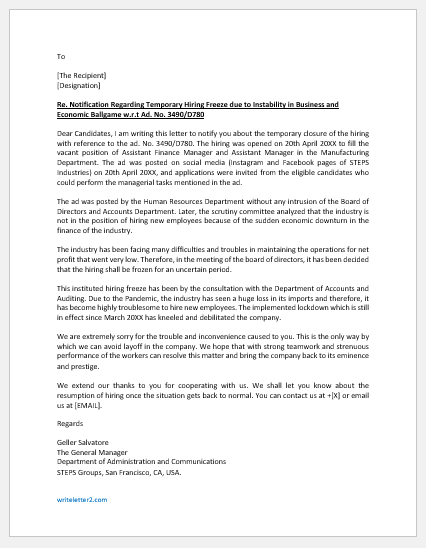 Re. Notifying the Closure of the Hiring on the Grounds of Retrievable Employment Policy of the Company

This letter has been sponsored by the TLC Group of Companies to announce the closure of the hiring. We have closed the hiring of new staff that was opened with respect to the ad no. 34490/C-1. Therefore, you are requested not to come for the interviews any further or send any applications. The authorities announced that they have closed the hiring on the grounds of the Retrievable Employment Policy of the company.

According to this company, any employee who resigns from the company long before can join the company later if a vacant position is available. The board of directors is liable to give the leverage to the ex-member of the staff. With the opening of the vacancies, a former employee of the company applied for the same designation. He had been working here for five years and had to resign over medical grounds. Now when he is fit, he has applied for the job here.

According to the policy, the company is liable to grant the job to the employee. He has been selected for the job as he also inculcates all the eligibility facets in him. We are sorry for any inconvenience brought by this. We will announce jobs for other vacant positions in the fall session in which the company would provide various opportunities for fresh graduates. Thank you for your cooperation. 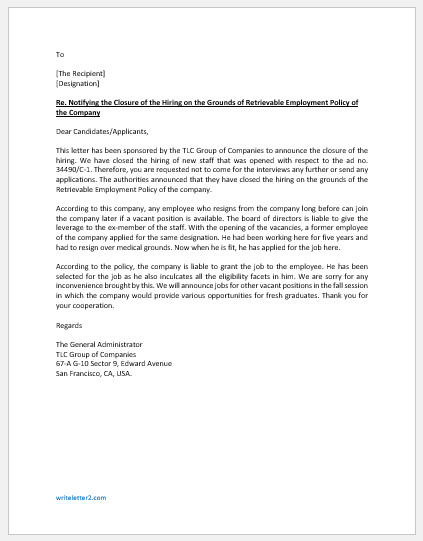