Warning Letter for Absent without Information

Subject: Warning for absent without information

I, being the manager of the Stars Marketing company, reserve the full right to issue you this warning letter on account of being absent on many occasions without informing me. This change in your behavior has been observed for the last three months which is very strange because every time you availed any leave, you informed the office well before time. However, the office has not been informed even for a single time for the last three months.

Mr. Smith, recall that time when you had signed the contract with us and it was clearly written that you must inform the management well before time in case you avail any leave so that an alternate could be arranged for work. But you did not keep this thing in mind.

You cannot measure the extent of loss the company had to bear owing to your absence without intimation because it was the peak season in terms of marketing activities. During this particular season, every single potential visit of a marketing person carries importance. Since you did not visit the market on a number of occasions, therefore, it proved disastrous for the company and targets have not been achieved for the last three months.

Keeping in view your past performance and services the company is not taking any serious step against you but issuing you this warning letter formally. From now onward, you will have to contact Mr. Jackson in case you want any day off because your leave balance is running short and you have to prove your eligibility first.

Moreover, you are advised to abide by the company rules and follow all the above-mentioned directions. In case of further noncompliance, you will be liable to disciplinary action which might be in the form of suspension or termination of your job. 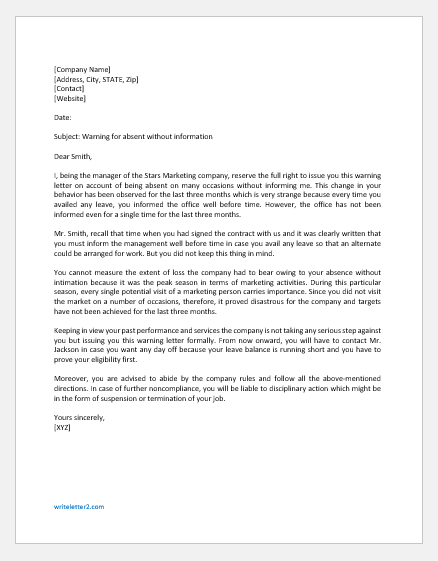 Subject: Warning for absent without information

This document serves as a warning letter being issued to you because you have been found habitual of being absent from office without prior intimation to the concerned officer. You have been working with us for the last five years and we found you satisfactory in all respects but drastic changes in your attitude are being observed over the period of last three months which is not acceptable in a worthy organization.

As reported by your office manager, you consider it as your full right to avail of four leaves in a single month in addition to two weekly holidays. My dear, in terms of official language this is called unprofessionalism which is not tolerated in any organization. If you remember, it is clearly stated in the employee handbook that no leave without prior intimation will be allowed and if an employee does so, disciplinary action will obviously be taken against such employee.

The company had been lenient with you despite knowing the fact that you had already been given a lot of verbal warnings but you did not put an ear to these warnings. The company had to bear losses every time you were absent without informing because no alternative could be arranged at that time. This time it was decided that you must be dealt with official language because you have left no other option for us.

This is your first warning letter and you know that three warning letters in a row can render an employee terminated from the service. We do not want that time to come but at the same time, we urge you to bring positive changes in your behavior which must be reflected from your attitude henceforth.