Through this letter, I want to inform you about the late coming policy that is going to be implemented with effect from the 1st of November, 20XX. The company was in dire need of formulating such kind of strict policy owing to an increased number of employees who are habitual to coming late to the office.

Punctuality and being disciplined are considered key-to-success of an organization. It was being observed by management for the last three months that office timing was not being followed in a true sense and that was the reason due to which, we were forced to formulate the policy as follows:

The above-mentioned policy has been designed for habitual latecomers only. Those who are punctual, need not be afraid of this policy. I hope at the same time that this policy will be taken as seriously by all the employees and they follow it in a true sense. 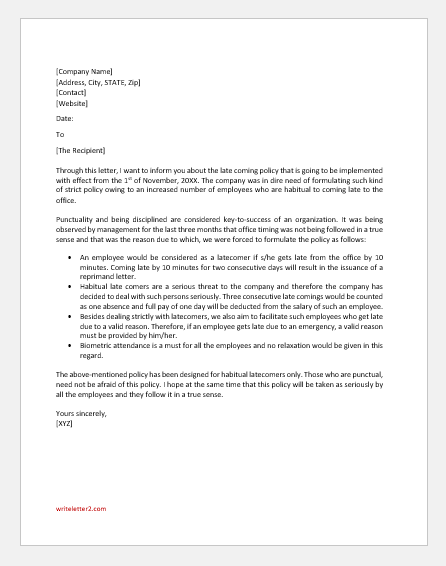 It is being informed to all the employees that the undersigned paid a surprise visit on [date] to the company office located at [place name]. During the visit, it was found that out of 20 employees, 10 were late by 10 to 15 minutes which was painful. Undersigned, when asked the manager about latecomers, was informed that all latecomers are habitual and despite being issued with warning letters, they have not brought a positive change in their behavior.

Keeping in view this alarming situation, a meeting of all department heads was called. The agenda of that meeting was to deal with latecomers in an effective and efficient way. Following points were decided with respect to late coming policy:

The purpose of the above-mentioned policy is to put habitual late comers back onto the track. I hope this policy will be followed in letter and spirit. 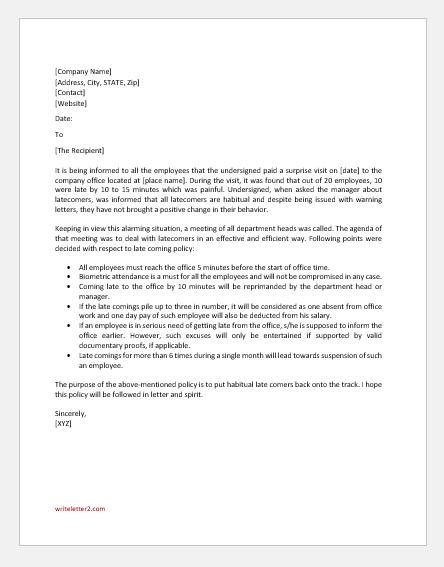