This type of letter not only does give good news but also serves as an inspiration for others. Announce the name of the person who is going to get this award. The efforts of the winner should be highlighted in the letter.

The achievements and the success of the person are also an important detail which let the people know about the reasons for which he/she is being awarded the award of the manager of the year.

The prize which the winner is going to get can also be mentioned in the letter. At the end of the letter, congratulate the winner wholeheartedly and wish him/her good luck.

Our heartiest congratulations to Mr [NAME HERE] who has been selected for the manager of the year award once again. S/he has worked as a sales manager in our company and has always stayed on the top among the best managers.

Due to this outstanding performance, he/she has been selected as the best manager in the company. We are also very pleased to announce that Mr [NAME HERE] will receive a big cash bonus from the company. We wish him/her the best of luck in the future.

I am pleased to announce the name of Mr. Thomson for the manager of the year award. I found him the most deserving candidate for this award. I have always seen Due to his commitment, he managed to rise from the position of assistant to his current designation.

He climbed this ladder in a professional way with such a hardworking attitude that can hardly be seen nowadays. I know that he is the kind of person who can go out of his way to achieve goals. In my opinion, his performance has been the best of any other manager in the field of sales. Therefore, he deserves this award.

This award is given to those managers who are devoted and able to demonstrate their exceptional skills towards their duties. Thomson’s abilities are not hidden from us. He worked hard and kept himself abreast of the most recent trends in the market.

I have seen him working for the company with dedication and since then, I have developed a huge respect for him. I am also aware of his knowledge, great skills, and extended hours he worked for the company to help achieve its goals.

Several things have been considered in choosing the recipient of this award. These include the number of service years, leadership skills, and overall character of the employee. The thing which distinguishes him from the other candidates is his ability to handle stressful conditions. Apart from these abilities, he recognized himself as a master trainer and acted as a mentor for several newcomers.

This prestigious award will be represented to Thomson at City banquet hall, Midway Street, Michigan on 1st August. I request everybody to make sure of his presence at the venue. Let us take this moment as a source of inspiration for us and work for the common interest of the company.

I wish you all the best of luck in winning this prestigious award in the future. 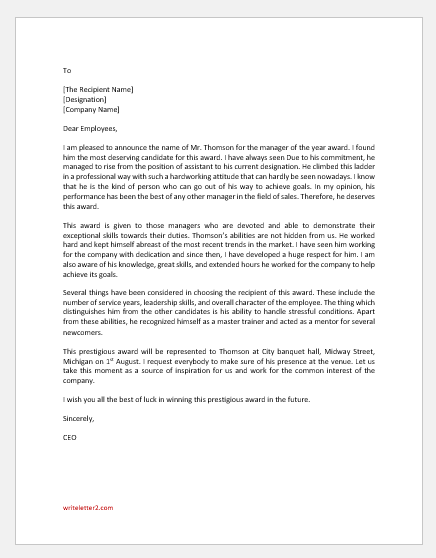 I am pleased to announce that the jury has recommended the name of Johnson for the manager of the year award 20XX. This is the most prestigious award and is given to those employees who show exceptional performance in their respective fields.

I know Thomson since 2011 when he joined this company. He was hired because of his excellent employment record. As an accounts assistant in XYZ Company, he met his targets. As Sales officer in Stars marketing, he showed record-breaking performance and achieved sales targets with success.

Right from the first day of his joining, he was a professional and skilled staff member until he reached his current designation. As a manager of the sales department, he has made a great contribution to the company’s business.

He has been an influential employee and bestowed with exceptional skills to complete all the assigned tasks well before the deadline. I have never seen such a great employee who gives supreme importance to his duties. Also, his desire to take on difficult projects and complete them successfully before the deadline makes him a suitable candidate for this award.

Apart from work, several things have been considered and the most impressive one is his pleasant personality. He has a pleasant and cheerful attitude towards his clients and subordinates. As a manager, he has been noticed to handle most difficult situations with patience.

All these characteristics reflect his best image in the company, and I will be happy to present this prestigious award to a candidate who deserves the most for it.

In recognition of Johnson’s services, an award-giving ceremony will be held at [name of place] on 1st August. You all are invited to make sure of your presence at the venue. I am sure you will be inspired.

I wish you all a successful career ahead. 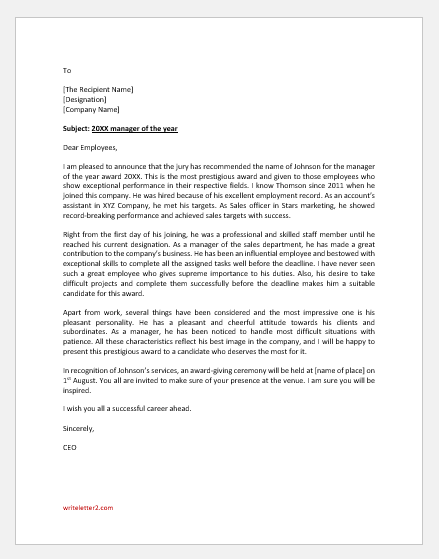