We got an update letter from the office of procurement which is stating that the cost of all the office equipment which you have purchased has been approved. We have, therefore, decided to pay you that money. We will add this amount of money to the payroll that you will receive by the end of the month. If you have any question regarding the information provided in the letter, you can feel free to contact us.

[Company Name] has several dozen computers, printers, copiers, and other pieces of used office equipment that we would be happy to donate to community organizations.

Each of the devices has been tested and found to be in working order, but we cannot make any further guarantees about their condition. All are supplied with all available cables, accessories, and software [where applicable].

In past years some community organizations have chosen to make use of this sort of equipment.

In their operations, as tools in training courses, or as the source of spare parts for existing office equipment.

A list of the equipment is attached to this letter, if you are interested in obtaining any of these devices, please contact me at extension 8987. Distribution will be made on a first-come-first-served basis. 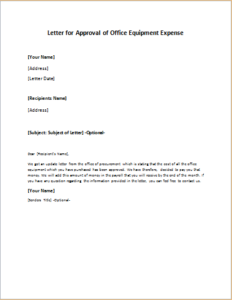