Letter of Explanation for Credit Inquiries

I am Stewart Hall from PTS Area Boston. I have received a letter showing some reservations on the account of Car Loan Lending from Gulf Western Bank, Boston. According to the letter, it has been reported by the Regix Rates Eco-F Agency that they have some reluctance and objections on my credit report. According to the company, I have been found unable to make the payments on time and one of the cards remained unpaid for three months.

This letter purports to clarify the misunderstanding and explain the cause behind those lags. Being a potential consumer of the Gulf Western Bank, I feel it is important to communicate the reasons that caused dark spots on my credit report.

Firstly, it has been stated in the report that I have been found making unorganized payments and have not been consistent and regular. Secondly, it has been entailed that in 2017, I was found under heavy debt for my credit payments because of non-payments for several months.

To cater to the first-mentioned point, I have attached my medical report according to which I met an accident after which I was bed-ridden for one week. My dearth of fulfilling responsibilities led to unavoidable conditions and my payment for the credit was impeded and postponed till the next ten days.

For the second statement, I have attached the client report from Delta HOR Bank of California in which the whole credit payment was hindered by the procedural and internal intricacies between the operational manager and branch manager of the mentioned bank. It not only obstructed my credits but also affected several other clients (letter attached).

As I have given ample details on credit inquiries and reservations indicated by Regix Rates Eco-F Agency, I hope my application for the car loan would be forwarded for further processing so that I can get the loan as soon as possible. For more, you can intimate me via email at [EMAIL]. Thank you. 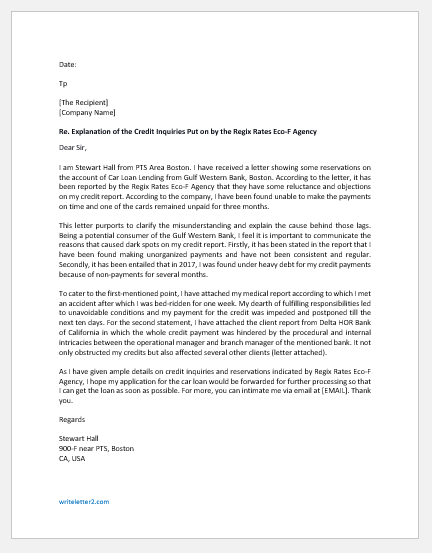 Re. Letter of Explanation on Credit Inquiries by Lynx I-B Investors and Foundation as Potential Lender

I am writing to respond to the concern of Lynx I-B Investors and Foundation expressed in the credit inquiry report as a potential lender. I am the potential borrower of Lynx I-B Investors and Foundation as I have applied for a loan of USD 3000 from the company. The company has stated a few points in the credit inquiry in which I am liable to explain the stated inquiries.

The following points have been mentioned by the company:

I– It has been stated that I have been a client to another bank situated in Wales, United Kingdom. The company has expressed hesitating concerns about my account in the UK.

II– It has been mentioned that I have been enlisted in the late-paying clients in the public report of UNAB Banking and Microfinance, Florida.

III– The company has expressed grave concerns about my monthly income which is USD 15000 per annum. The company reflects deliberately that the salary is not enough for paying the debts back to the company.

Point (I) entails the reluctance over my account in a foreign bank. To explain I have enclosed the proof of my job in the UK from May 2016 to May 2019. According to the Federal Law of Banking and Foreign Accounts, it is permitted for an American citizen to hold a foreign account while working abroad.

Therefore, I believe there should not be any scruples in this case. Moreover, I have had already applied for the account closure but it has been delayed by the bank administration (see a copy of the application attached).

Point (II) embarks on the listing provided by the UNAB Bank Florida in which I have been listed as a defaulter or late-paying client. UNAB Bank’s management was involved in corruption, and they increased their interest rates illegally for which I complained in the Court of Banking and Commerce Deals, Florida. The case still has been proceeding and under trial (copies of the required documents attached in .png print).

Point (III) states that my salary is not enough (i.e., USD 15000/-) per Anum to pay back the debts and hence I do not meet the loan criterion in this regard. My gross salary is USD 15000 whereas my net salary makes USD 25000/- and it makes me eligible for the loan. I have attached copies of my salary details directly from my office’s accounts portal.

I hope these details are sufficient for the explanation of the credit inquiries asked. I am glad and gratified with the company’s move in providing me the opportunity to explain at my end. Please contact me for any further queries at +1-534-354-562 or write to me at [EMAIL]. Thank you for reviewing my report and rendering me a prospect to write to you. 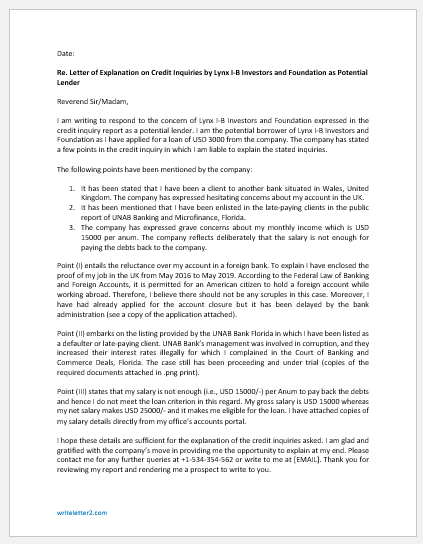