Warning Letter to Employee for Stealing Money from Office

Subject: Warning letter to employee for stealing money from office

You are directed to consider this as a warning letter that is being issued because you have been accused and found guilty of stealing money from the office of Ms. Angela, who is working as an assistant manager in this office.

It was recorded in CCTV footage of the 20th of August, 20XX that you entered Angela’s office after working hours. You can also be seen there, carrying the duplicate key in your hand, unlocking her rack and thereby stealing that money which she had forgotten there. Fortunately, it had all been recorded by the camera which made it easy for us to analyze that you had entered her office without her permission and took away all the money. An inquiry committee was formed, and you admitted your mistake stating that you had to buy the medicine for your wife who was admitted to a hospital and you had no money for that.

You are well aware of the company rules that any kind of theft is strictly prohibited as it has also been mentioned in service rules made for the employees. It is considered as a serious offense and an employee accused of it is liable to be terminated straight away. Keeping in view your services for the company and considering the circumstances under which you were forced to involve yourself in this shameful act, Ms. Angela has taken back her complaint but management is still of the view that you must be given this warning letter so that you must refrain from such activities in future.

Therefore, this is your first formal warning letter and you must keep it in your mind that any further mistake of this kind will kick you away from your job and within no time, you will be terminated without any prior notice. So, make sure to stick with company rules. 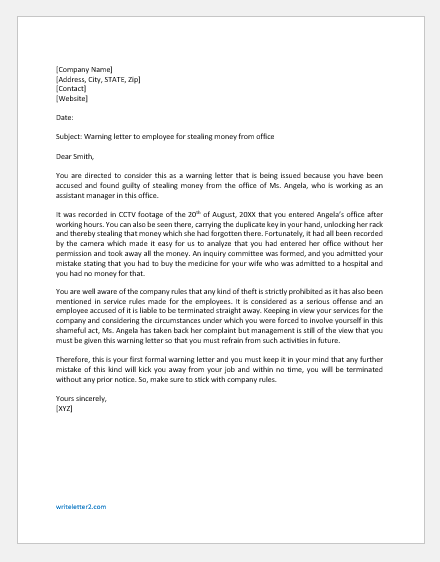 I, being the CEO of XYZ company have full rights to issue you this warning letter on account of your misconduct which took place in the form of stealing money from Mr. Roberts’s office on the 9th of September, 20XX.

On the above-mentioned date, as it was recorded by CCTV cameras of the office, you were found to enter the Assistant Manager’s office after working hours. It was also seen that you entered having nothing in your hand but when you came out of the room, you had a bundle of currency notes in your hand. This matter came into my notice after Mr. Robert lodged a complaint in my office. After investigation, I came to know that you had been given no authority to enter his office and that you entered there with full intentions of stealing.

This is a highly unethical act and must be rewarded with immediate termination from job but your manager, after conducting a meeting with me, requested me not to terminate you keeping in view your previous performance. Therefore, I decided to issue this warning letter along with order to return all the stolen money within 24 hours. In addition, you will apologize for the aggrieved Mr. Robert verbally as well as in writing. In case of non-compliance with the instructions, you will have to face the court proceedings on account of the misconduct of stealing.

Moreover, you will have to sign a surety bond in which you will assure us to refrain from such unethical activities in the future and reflect yourself positively. 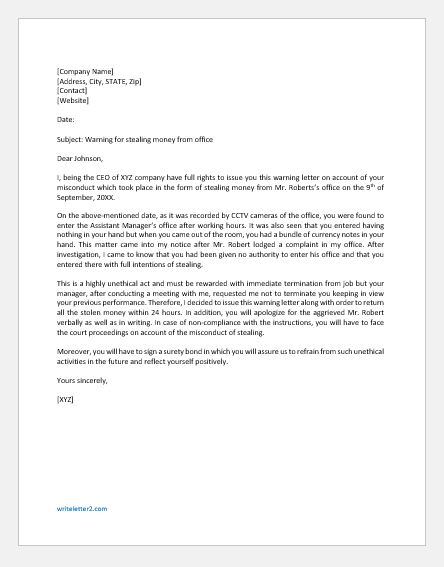