I am Stewart, CEO of the company in which you were selected as a probationer six months ago. You are directed to consider this letter as an intimation of termination. I had never thought of writing any employee like this but you know that there are some hard rules settled down by each company and these are to be obeyed by all means. While receiving the appointment letter as a probationer, you were made aware of this fact that your employment will be regular and permanent on fulfillment of two conditions;

After a detailed deep observation and evaluation of your work by our officials, it has been decided that your contract will not be extended anymore. It means that your probationary period with this company is being terminated and you will no longer be a part of our organization from 1st of September 20XX, as decided by evaluators. All this happened because you have failed to meet the standards of performance to convert a probationer or a contract employee into a regular one.

For now, you are directed to surrender all the company property, records, vehicles, identity cards, and other belongings that had been in your use during this period. Please hand over all such belongings before the termination date. At the same time, you are being advised to work harder and never give up because this is not the end. Thank you for serving our company and we wish you all the best of luck for your future endeavors. 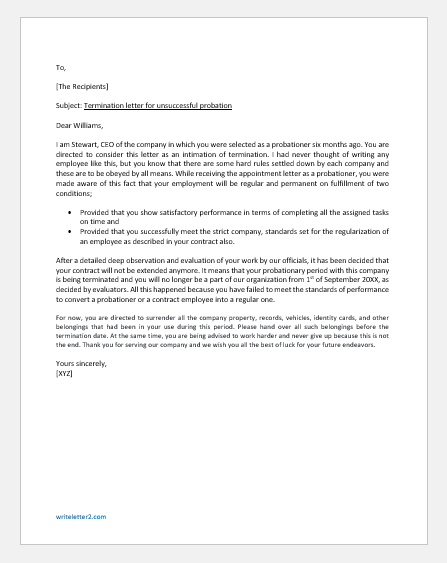 I think that your department head has already told you about the matter but still, I thought it necessary to inform you formally through an official letter that your probationary period is going to end after three days, from 1st of September, 20XX.

It further means that you will no longer be a part of our organization with effect from the date mentioned in this letter. As you were also made aware of the clause mentioned in your contract that your employment with this company will be provisional on a probationary basis initially for a period of six months. During that time period, if we found your performance unsatisfactory, we had reserved the right to terminate your contract and employment. On the other hand, you were also given the right to leave the organization whenever you found this organization not-at-par with your standard.

Recently, in a meeting with senior employees and your department head, it was recommended after a detailed discussion that your performance is not up to that standard which has been set by the organization. Since they had been observing you since the very first day of joining, it was revealed to me that you are in a habit of submitting the assigned task after deadline. On several occasions, you were found wandering outside during office timings. You will not be tolerated with such traits no matter which organization you join.

Since the termination of any kind is just like a dark mud blot on an employee’s profile and is harmful. So, considering this point, you are being given 48 hours to submit your resignation to the HR department. After said period, a termination letter will be posted to you at your home address. We wish you all the best for your future. 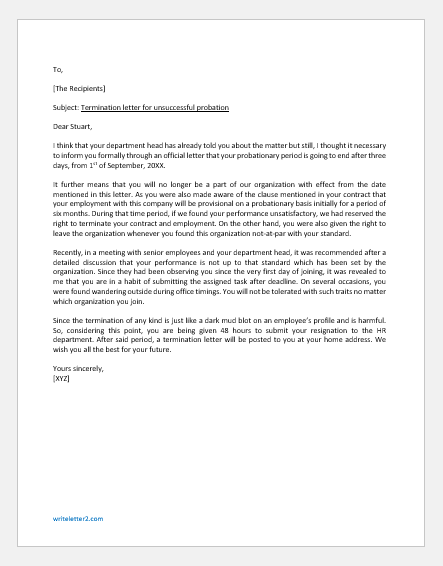