Warning Letter to Employees for Gossiping

You must consider this document as a warning letter that is being issued to you on account of gossiping in the office during working hours. As outlined in clause #17 of the employee’s handbook, your act falls under the category of the company rules violation.

On the 12th of August 20XX, it was reported to me through my reliable resources that you are spreading rumors in the office that Ms. Nina has an affair with Mr. Lee. I investigated the matter properly and kept a strict eye on their routines. After an intensive investigation of two weeks, I felt ashamed because the rumor spread by you not only turned out to be false but your act had caused extreme harm to the worth of both the above-mentioned employees. The notable thing in that report was that you did it deliberately in order to belittle Ms. Nina, who had rejected your proposal a month before.

While signing the contract with our company, you acknowledged that you had received and read the employee handbook which deals with the company policy about gossiping. That particular handbook also addresses the possible consequences of violating the policy. You are well aware of this rule that gossiping about any of the company employees is strictly prohibited within and outside four walls of the office. Our employees are our assets and we don’t wish to see them belittling at any cost.

The severity of the matter demands your immediate termination from the company but keeping in view your previous performance, I personally want to give you one more chance so that you would improve yourself morally and develop a good sense of professionalism. Consider this letter as a first and final warning from my side. Any further violation of any of the company’s policies will result in strict disciplinary action which may be in the form of possible termination. 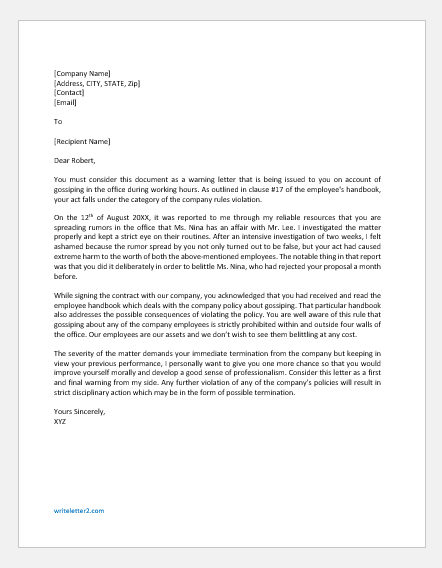 This is Johnson, CEO of the company in which you are working currently as a customer service officer. The purpose why am I writing you this letter is your unprofessional behavior at the workplace in the form of gossiping with your fellow, Mr. Lee.  I want to remind you of the first day when you signed a contract with us. Clause 18 of that contract emphasizes not to gossip at the workplace. Breaching of this rule can make you liable to strict disciplinary action which further depends upon the severity.

Being the CEO of the company, I am having a strict eye on all its affairs regardless of their nature. One of my reliable resources reported to me that on the 13th of August 20XX, you were found gossiping with the above-mentioned fellow instead of listening and solving your customers’ complaints who were standing and waiting for their turn in a long queue. In official terms, this is what we call unprofessionalism and violation of workplace discipline.

As a CSO, you are meant for the customers and must engage with your customers all the time. I had received some kind of complaints against you a couple of times before but I ignored them completely.

You are supposed to consider this letter as a first and last warning letter. I want to clarify here that any further complaint against you can cause suspension or termination of your contract. By nature, you seem to be a good guy. So I advise you to improve your behavior and show your professionalism in the office environment. 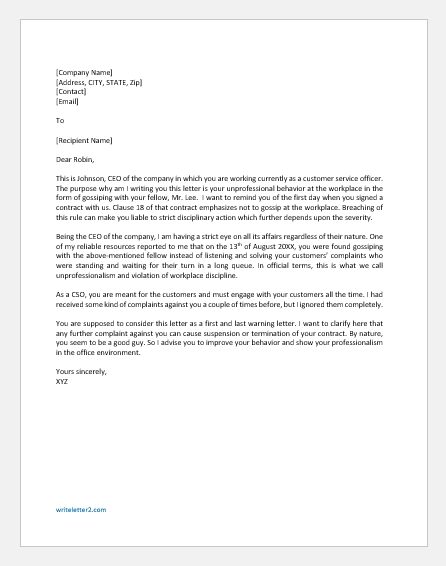