Families are not always happy families neither do the family members always live together. In the case of mutual conflict, divorces etc., the parents of a child part their ways. In such situations, it is the child that suffers. He either has to go to the childcare centers adopted by someone or has to reside with one of his parents. The parent of a child might want to claim to take the child in his custody. For this, he/she has to prove that he/she can take good care of the child and can give him a good environment. A character reference letter is written as one of the supporting document for this purpose. This letter is written by an acquaintance or friend of the parent wanting child’s custody. The person writing the character reference letter must know the parent personally.

To Whom It May Concern

My name is [enter name] and I am working as [enter title] at [enter organization]. I am currently residing in [enter place]. Mr. [parent name] happens to be my neighbor since [enter period]. For some reasons, his marriage could not prove to be successful and hence ended up in divorce. However, I think, unsuccessful marriages cannot prove a person’s character wrong. Because I know him and his background quite well, I can say with full responsibility that his marriage failed because his wife was not serious to get along. Otherwise, as a person, I see Mr. [enter name] a person of high character. I have also observed him a few times when his child comes to meet him. He is friendly with him and takes good care of him/her too. I am sure he owns the potential to raise his child in the best of the environment and hence his child should be given in his custody. 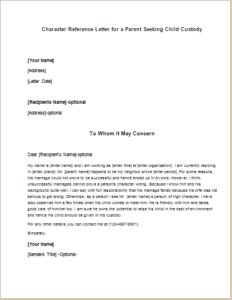