This letter is written soon after the incident of giving the wrong press statement. The main focus of the letter should not be on the actions that have been performed before but it should focus on what steps you will take to resolve all those issues. Apologizing in the letter solves the problem and it can settle the things. You can apologize directly in the letter to avoid giving long details. It is important to let the reader know that you have understood what he has faced after the wrong press statement.

If you think that you have taken some measures in order to correct the mistake of the wrong statement, then mention it. You can tell the whole incident how this all happened and do not blame anyone. If you think that you did not know about the problem, then say thanks to the reader for notifying you. At the end, you can say that you expect that your personal apology letter will be accepted.

I want to apologize seriously about the press statement which I gave you. I was in rush because of mixed up notes and was unable to mention the correct position of yours. I have now realized my mistake and I took several steps to ensure that the wrong statement about you is no more aired. I have made a report that will clearly demonstrate your accurate position. I know that I have made a mistake and I will do everything to compensate this mistake. Please accept my apology for regarding the issue of the wrong statement. 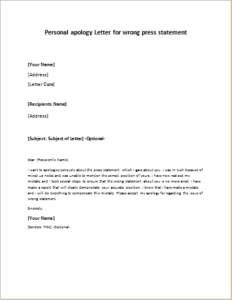 I want to express my regret for a serious mistake which has caused great harm to your reputation. I hereby apologize for the wrong statement I gave against you in front of the press. I connected the issue of [X] and [X] directly with you and you were not involved in it at all. I made this blunder and I am extremely sorry for that. Believe me, it was not my intention to commit this act deliberately. There was a big gathering in the conference hall and everybody was rushing towards me to give a handshake. In this situation of haste and excitement, my notes were mixed and I was failed to justify your position. Instead of praising you, I made your connection with the corrupt group.

Unfortunately, because of my wrong statement, your distorted image has been created and I take full responsibility for my mistake without making any excuse. I should have read my notes well before making any kind of statement. To err is the human. Considering this point, I thought of seeking an apology through this letter. It’s the only way through which I can regain my trust and strengthen my relationship with you.

I truly value our friendship. Therefore, as soon as I realized my error, I took all possible measures to prevent my statement from going on air. Meanwhile, I have arranged a separate press conference in which I will clarify your accurate position before the public.

I hope you will understand my position and grant an apology to me. 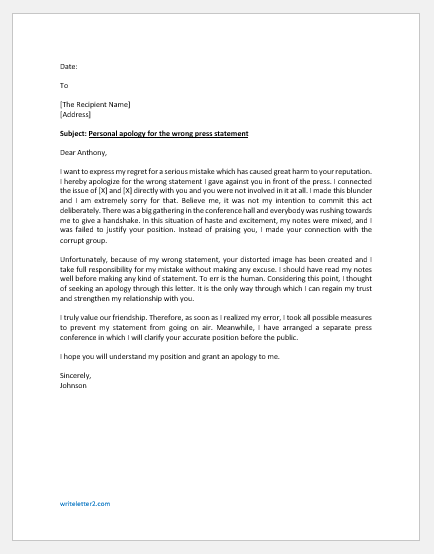 With deep regret, I apologize to you personally for making the wrong statement against you in front of the press. Instead of acknowledging your excellence, I represented your distorted image. I know it was frustrating for you to be misrepresented before the media. Please understand this incident took place because of a misunderstanding. My statement was wrong, and I made it without knowing the whole issue. I have no excuse for committing such a great mistake.

Adams, you know that media persons my office frequently. Sometimes, I become too quick in making a statement without knowing all the facts properly. As soon as I realized I had made mistake, I quickly printed a notice of clarification explaining your accurate position. I gave each media person a copy of this notice and strictly restrained them to make my statement on air.

Above mentioned steps are not enough to make up for that inconvenience that has been caused to your fame. But this gesture of mine can help me assist in rebuilding your trust in me. We have been good friends and will be forever. Our friendship must not be affected by an incident that took place because of a misunderstanding. Once again, I am sorry for my wrong statement. I will get a lesson from it and refrain myself from making such kind of statements without good knowledge of the issue.

Please feel free to let me know your concerns over this issue. You can contact me at [cell number] during office hours. 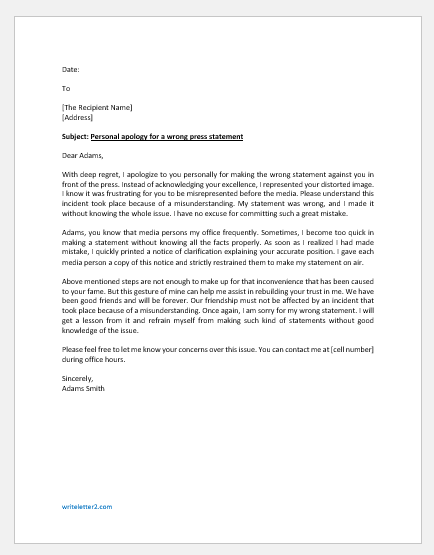