Smoking is becoming very common. Especially, young boys are adopting it as a fashion. They start the experiment from their school time and then they become addicted gradually. The youngster’s company also matters a lot. This habit develops much faster when one is having the company of addicted smokers. Smoking is dangerous for health. It simply damages the health and, addiction leads to mental illness also. The people in the surrounding of chain smokers become passive smokers. They also get the dangerous effects of smoking even though they are not smoking. In schools, colleges, universities, offices it is strictly prohibited. As well as in big malls, kids play land, and cinemas it is prohibited. The media also plays a good role in telling the negative effects of smoking. When someone tries to break the rule of prohibition is the specific places, a complaint should be done against them. And, strict actions should be taken against them.

I hope you are doing well. I am a member of your club since five years. I come along with my family every fifth day. We are greatly satisfied from the kid’s swimming suite, gymnasium and tennis court. In addition, we take dinner here on weekly basis. Two days ago, I found a serious problem. I found two persons smoking in the kid’s swimming suite. I was amazed when I saw it for the first time. I tried to talk to them and inform them that it is strictly prohibited. But, they replied much arrogantly and rudely. I need you to take strict action against them. Smoking is just a disaster to the person as well as to the passive smokers. It looks so inappropriate and awkward to do such things in the areas specified for kids. It is not only the issue for my kids solely, dozens of kids are suffering. As a member, it is my responsibility to inform you timely. Please take quick and strict action against them.

Thank you for the time and consideration. 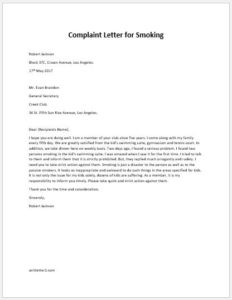