Through this email, I hereby admit the blame put on me on account of rude behavior in our office on the 20th of August, 20XX afternoon. I admit that my actions were purely inappropriate and not suited to the situation. It led to the creation of an unpleasant incident that created a tense environment both for our colleagues and the rest of the staff members. Considering myself fully responsible for the incident, I want to say you sorry from the core of my heart.

I don’t have any idea whether you are aware of my nature or not. Truly speaking, I am not having the quarreling nature. Usually, I respect my colleagues and take care of their sentiments. But, on that particular day, I was failed to behave appropriately, thereby defaming myself on behalf of my own acts, causing the tense situation at the workplace as a consequence.

My dear, on that day, I was filled with anger owing to the workload which was not being managed by me for the last couple of days. It was all that pressure which enforced me to behave with you in a rude way. Doing so, I totally forgot the worth and norms of the workplace and unfortunately, I was failed to set an example for the juniors to follow.

Meanwhile, admitting my severe mistake, I promise that I will be careful in terms of my behavior, avoid unprofessional attitude at the workplace, and at the same time, You will see a positive change in me which will surely be reflected from my mature and professional behavior.

Accept my true apology. Keeping in view our past relation, I hope you will ignore this mistake of mine and look forward to stronger relationships between us. I am seeking your forgiveness.

Through this email, I want to say you sorry for the shameful act I had sown in your office on the 25th of August, 20XX. After that incident, I felt ashamed of my act which was inappropriate in every way. I had never anticipated such a rude behavior with such a nice personality like you but. Mr. Richards, believe me, I did not act like that deliberately.

Before reaching your office, I was stuck in heavy traffic in the way and had a quarrel with the traffic officer. Unfortunately, my mood remained stiff until I reach your office. Then, the Irony of fate was that you told me a joke. As I was over raged at that time, I could not tolerate it and started bursting at you. I could never have behaved like this with you, but I was out of control at that time due to which, this incidence took place.

Once again, I apologize in a true sense and at that same time, I have expectations that you will forgive me and ignore my mistake considering our past relations. I also have made a plan to meet you at your residence in order to seek your forgiveness. I hope you will receive me with a smiling face. 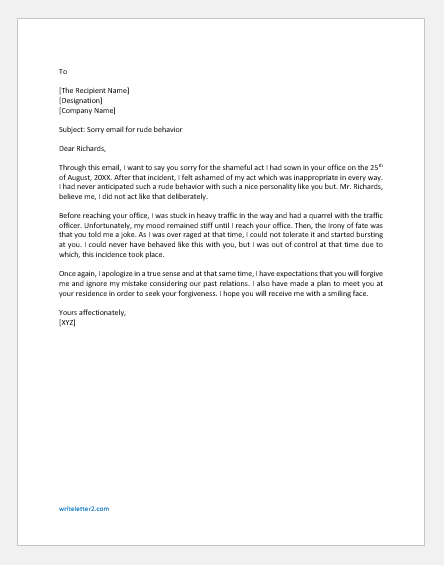