Nowadays, the fastest transport is an airplane. It is giving benefit to trillion of people living in far off places from their families. In the case of any emergency, they can reach to their beloved ones as soon as possible. All countries have now provided this facility to their nation. People along with things can benefit from this means of transport. The facility of the airplane is availed through the airline service. An airline is an organization that provides air transportation for passengers and freight. The luggage is the matter of concern for the passengers. When buying a ticket the amount of luggage that can be carried is mentioned. For extra luggage, the additional charges are paid. Sometimes, people face the issue of lost luggage. In such cases, they need to put up a complaint to the airline office to find out their lost luggage.

I have freshly returned to California from Canada via Washington on flight AR 203 and AR 209. I had reached California on 13th July 2017. My journey was safe and sound from Canada to Washington. My luggage was also all cleared at Washington airport. But, at the Washington Airport, the flight was delayed due to some technical issue. After I reached my destination, I found out that one of my bags with tag number XX-00223 is missing. I went to the lost luggage counter immediately and gave them details. The Person Mr. Rex told that they will contact me within 24 hours after tracing and resolving my issue. It is the 5th day I have no response. It sounds much unprofessional. I am much disappointed that a well- known airline in the state cannot resolve this little issue within the premises. Nowadays, technology has brought a lot of advancement that everything can be traced in a pie of a second. My baggage had valuable assets inside, I cannot afford to lose it. My number is (310)-467-8923. I hope that my bag will be located soon and returned.

I look forward to updates and compensation as well. 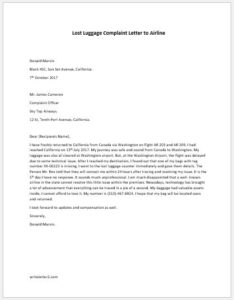