You have been accused of cash misuse by your manager and therefore being addressed through this letter by me. Being an accountant of this company, you carry an important position since you have to deal with the cash and due to this reason, you are fully responsible for all transactions take place daily.

Last month, you were credited with an amount of [US dollars] in your account. The purpose of crediting you with this amount was to spend it in lieu of purchasing some items in bulk. As per the rules of the company, you kept all the records in form of bills, receipts, and invoices. On reviewing the record, this fact was unveiled that amount you spent in purchasing of items was far less than the actual amount you were credited with. Since you had informed us that the whole credited amount had been consumed, it proves that the cash has been misused by you. I am further looking deep into this matter nowadays.

Dear Harry, we do not have any space for dishonest employees in our company. If, after inquiry, it is proved that you have indulged yourself in this malpractice, you should be ready to face the consequences. Moreover, I have some queries regarding this matter and therefore, I want to meet you personally. You are therefore directed to attend a meeting with me tomorrow in the conference room at the company head office. Non-compliance with the instruction will result in the initiation of further disciplinary action against you. 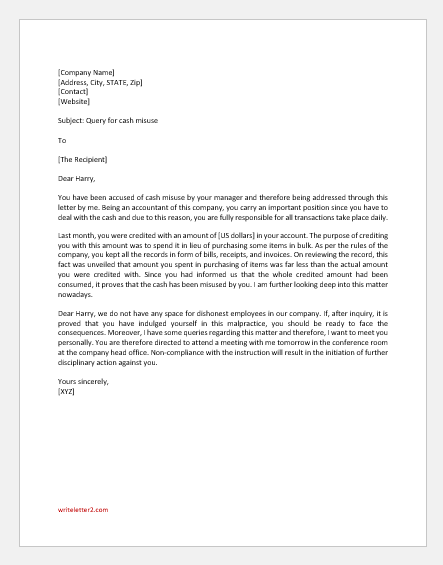 This letter is being issued to you in response to your manager’s complaint in which he has blamed you for company cash misuse. As per his complaint, you were given a big responsibility to purchase some needed items in bulk amount. For this purpose, you were also provided with an amount of [US dollars] which had to be used in lieu of purchasing those items.

A few days ago, receipts of bills and other invoices were cross checked, and my team found some discrepancies in cash. Moreover, some of the items which you claimed to have purchased were not found in the storeroom while you have kept the receipts of all such items in your record as well.
All these circumstances are showing that you have really been accused of misusing the cash and your manager has lodged the right complaint against you.

Mr. Alex, I want to inform you that we have no space for such employees in our company and we deal with them strictly. You have been working with us for the last ten years and I was not expecting this kind of behavior at least from your side. Keeping in view your past performance in mind, before taking any serious step, I have some queries in my mind regarding this issue. You are therefore requiring meeting me at the head office tomorrow at 10 a.m. sharp. You will be given the right to say in your defense. Make sure your presence at a specified time. 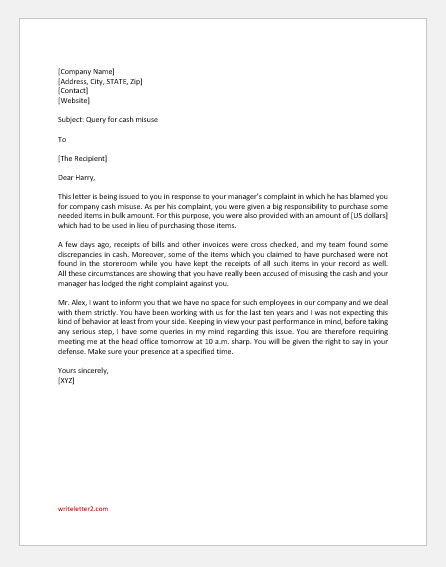