Subject: Violation of the code of conduct

My name is Watson and I am a regular customer of your company for the last ten years. Through this letter, I want to lodge a formal complaint against one of your newly appointed staff members whose name is Mr. Lee.

I have been doing business with you since the very first day of your opening and I had never faced such panic before. I know that you have established a set of rules for your employees in the form of ‘code of conduct’ which are to be followed by all the employees of the company. I regret to inform you that I am not happy with the services provided by the above-mentioned staff member of your office because he did not follow the code of conduct while dealing with me.

On the 5th of September, 20XX, I came to your office to get information about my payment plan. Mr. Lee was dealing person on that day. I asked him a few questions regarding my issue. Instead of answering me politely, he behaved inappropriately and used an abusive language with me. I was surprised at that time because none of your staff members had misbehaved with me like that. I am also an employee and know this thing very well that using an obscene language with customers is not acceptable at all at the workplace and is a breach of the company’s code of conduct.

I could have sent this letter to your CEO instead of you but I thought that Mr. Lee is a newly appointed employee and he should be given a chance to rectify himself that is why I wrote you because you are his immediate boss. So, you are suggested to train him as to how to behave professionally and politely with potential customers. Moreover, if I face such a situation in the future, I will stop doing business with you.

I hope you will understand my situation and come up with a solution in response to my complaint. 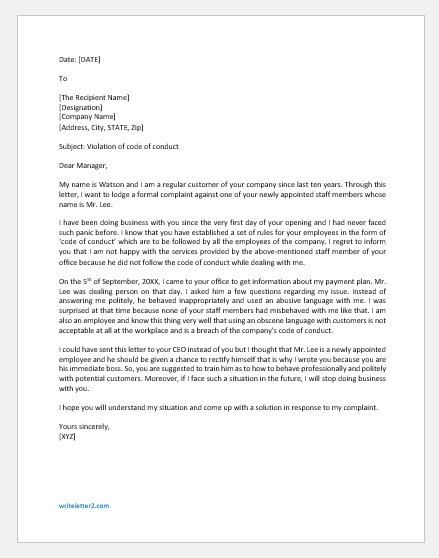 My name is Stuart Williams and I have been forced to write you this letter as a complaint against one of my subordinates Mr. Johnson on account of breaching the ‘code of conduct’ of the company. He is accused of insubordination and neglecting my warnings. I have many supporting pieces of evidence for each violation of the code of conduct exhibited by him at the workplace. I am attaching all the evidence along with this letter as proof.

I had also received a lot of complaints about his misbehavior with our customers. His terms with his office colleagues are also not good and nobody is happy with him in the office. I had warned him verbally as well as in written but all in vain. He did not pay any attention and violated the code of conduct every time. I wrote this letter when I thought that the situation has gone beyond my control.

Being the CEO of this company, you are requested to look into the matter personally and give due consideration to my complaint. Please take some necessary steps in this regard otherwise the situation will become pathetic. For the smooth functioning of the office and a healthy working environment, this matter needs your attention. Thanking you in anticipation. 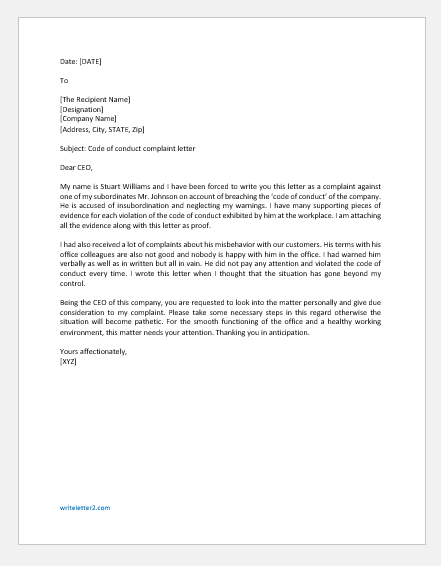