I am Charles, working as an assistant director in the sales and marketing department of your company. I am writing you this letter to submit my apology for the big mistake which I made while preparing the project feasibility report and due to which, we were not given that project.

I have realized that my way of report preparation was not an accurate one and due to this reason, we had to devoid of an important project. Now, I wish to say sorry from the core of my heart, and at the same time, I seek another opportunity to prepare a correct report and to prove my worth which has been lost after this mistake.

I held some successful meetings with the project head at [XYZ limited] and the process was going in smoothly when one of the representatives from his company found some technical errors in my report. Instead of rectifying those mistakes, I tried to cover up the matter and sent them a mail containing a few minor lies. It was one of the worst decisions I made at that time and I should have behaved more responsibly in terms of my actions.

We had to suffer a lot owing to my incorrect report as our company not only had to let go of an important project, but its reputation was also lost.

After all this, I am having full knowledge of the fact that you can dismiss me at the spot, but I want to ask for another chance for the preparation of the correct report. I promise that I will get a new project within one week to cover up my mistake.

I am an honest, punctual, hardworking, and dedicated employee of the company, having the best track record but “to err is human”. Considering this fact in mind, please do not take a serious step as a result of my incorrect report. I hope you will forgive me and take a light decision in this regard. 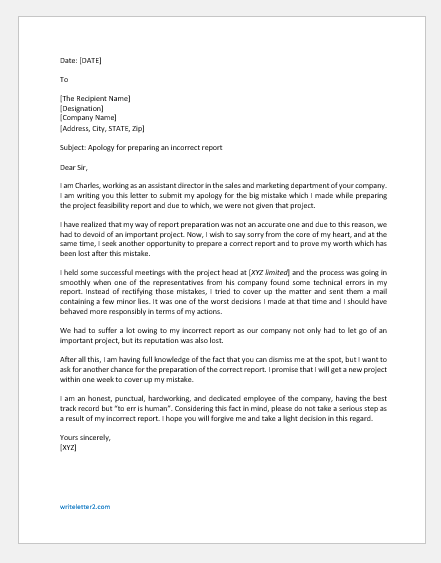 I want to express my deep feelings of regret for preparing an incorrect report on a very important project. I am well aware of the fact that I have not been able to deliver what was being expected from me and that owing to a lot of technical mistakes in my report, we have not only lost an important project but also our repute in the market.

Although I am responsible for the current embarrassment which has been created due to my mistake one thing I want to mention here is that I have not been able to keep a balance between my personal and professional life. You know that my wife died last month, leaving me and my children in a shocking situation. In order to deal with the situation, I had been using sleeping pills for more than a month for mental peace. My professional life must have not been affected by my personal life, but you know sir, emotions go side by side with the man, and my current mistake in the form of incorrect report preparation is a result of that crisis.

Before you take any serious step against my mistake, I wish to say that I love my work and current company. I promise that such a mistake will never be repeated in the future. Please accept my apology for preparing an incorrect report and give me another chance for the same purpose. I will prepare the same report accurately within two days and win a new project for my company. Thanking you in anticipation. 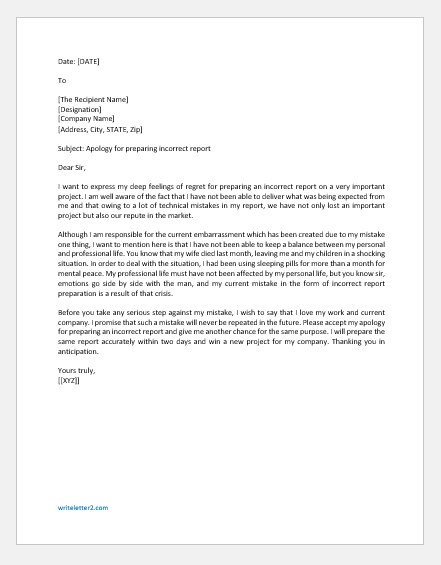