With due respect, it is stated that Mr. Peter White has been our colleague as an assistant manager for the last three years now. These three years have been enough for him to prove him an honest employee and a dedicated person who has been sincere and loyal with the Alexa Stocks and Securities. He has always been a self-made man and never asked for any financial help or an advance salary.

However, recent days have been very hard on him as his financial condition has gone distorted. His eldest son is ten years old and is going through a severe as well as rare respiratory disorder, the medication, and check-ups of which have completely drained all the savings he had made.

Mr. White is, hence, in severe need of money these days to meet the expenses of his son’s treatment and medication. He has requested to your bank (LMX Bank) for the loan of 2000 Pound Sterling for the purpose which he aims to payback along with the amount of interest in the time period of as soon as one year.

For that purpose, the process of loan sanctioning needs your approval and recommendation as the authority rests with you as the senior manager of the bank. It is a humble request to kindly accept his request and let him have the required amount as a loan, sir. He is already drawing a monthly salary of 250 Pounds a month including all the benefits he is being given.

This letter is being posted to you at Mr. White’s request and he assures you that he will not take any further loans from this bank in the future. He has been one of the most reliable employees on board and I assure you that he would act with full loyalty in this case as well and will not harm our company’s reputation.

In case of requirement of any information regarding him, please feel free to directly contact us in our office. I hope that you will consider the request and will approve to sanction him the loan in due time. Thank you for your time. 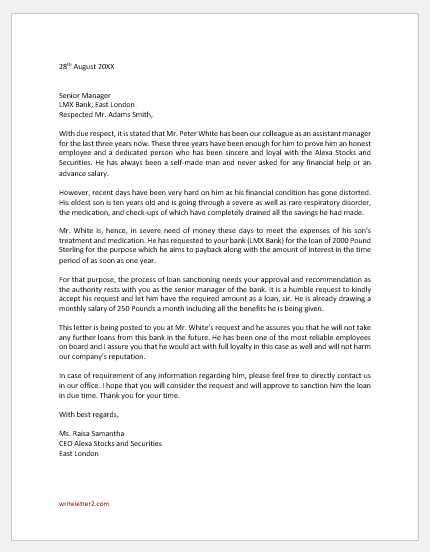 With all due respect and honor, it is stated that Mr. Shawn Sterling has been included in one of the wealthiest business tycoons of Sandringham Estate. He belongs to the family of royal treasurers of the Sandringham House in Norfolk, England where his father was himself a dignified and respected personality carrying the Queen’s influence all his life.

I know him as he is a dear friend of mine being a family friend of my grandparents. Mr. Sterling has throughout and thoroughly maintained his reputation and financial status by investing in some real estate business and in another business of fodder production in the countryside.

However, his companies have been facing severe financial setbacks after the demonetization and the recent political issues where farmers stood in protest. He is in a serious financial crisis at the moment where he has stopped receiving payments, rents, and profits. Now he is unable to pay his staff and to maintain his industrial setup which verily requires an enormous amount of money on a monthly basis. He had visited me recently, requesting to put forward for a bank loan from your Sunrise Bank which is a well-reputed bank in the town of Norfolk.

I guaranteed him that I would try my level best to get him the loan by asking you to help him. His business is going at a loss and he is genuinely in need of at least 20,000 Pounds for the time frame of 2 years to pay his staff and maintain his industrial setup. It is probable that with the settling down of the farmers’ protest and other political upheavals after the elections, the situation would get back to normal, making the situation better for Mr. Sterling and his companies.

Hence, I request you to kindly approve and sanction him the loan that he requires, or else he might get into hot waters. His name has been both admired, as well as respected by our friend circle, and family. He has proved his ability continually to face any sort of challenge coming his way and he has always been faithful and steadfast against all evens and odds over time. I have known him since our childhood.

In the economic and political situations going around the country, he is in desperate need of funds to keep his businesses going. There can be a no better option of a bank other than your Sunrise Bank in providing loans with such low-interest rates.

I hope that you would consider my request and would provide Mr. Sterling with the amount of loan that he requires. If you have anything to enquire about him or the case, you can always contact me directly. Hope to hear from you soon. Thanking you in anticipation. 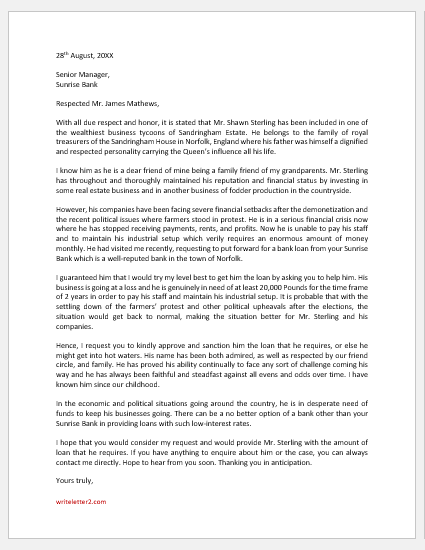