Letter of Non-Compliance to Employee

I am writing this legal notice on behalf of my client, CEO of [ABC] Industries, who contacted and instructed me about your breach of contract and therefore, you are being notified as under:

My client, Mr. [XYZ] is engaged in the business of processing and manufacturing leather goods of import quality.

On 1st of January 20XX, you submitted your resignation to the Human Resource Department of our client on medical grounds according to your resignation letter. You stated the reason that you could not continue with your job in our client’s company due to poor health condition.

HR department rejected your resignation letter on the 3rd of March 20XX straight away. The reason behind that rejection was that there existed an agreement between you and my client’s company and at the time when you signed the contract, it was clearly mentioned over there that you will serve the company not less than two years whereas you wanted to leave the company 6 months before the agreed period.

As per the terms and conditions of the contract letter, it was also agreed that if you wanted to leave the company before the agreed period, it was mandatory for you to inform my client before 90 working days whereas, you submitted your immediate resignation which was a breach of contract.

The day when your resignation was rejected, you were informed on the same that by my client that your resignation has not been accepted at all and that you were also directed to report to my client immediately. But you did not show compliance with the instructions.

According to a clause of the contract, my client is fully entitled to recover the amount for the harm caused by you to his project or product. Since your immediate resignation hampered the project of my client, my client sent you an email and you were liable to pay an amount of $200,000 in lieu of that loss which was born by my client, within seven days of receiving the email.

You were failed to deposit the said amount within the stipulated date due to which my client has been forced to take legal action against you.

You are therefore informed through this legal notice to submit the above-mentioned amount in addition to [dollar] within four weeks of issuance of this legal notice for the inconvenience caused by you. Otherwise, my client will be forced to start formal legal proceedings against you.

(Name of firm sending legal notice on behalf of client) 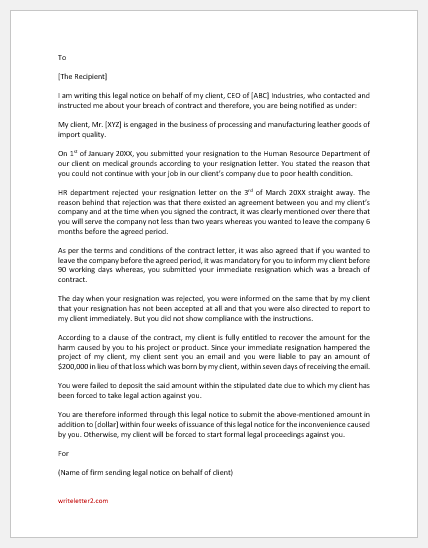 This legal notice is being sent to you on behalf of my client Mr. [ABC], CEO of [department name], who consulted with me about the matter of breaching of your contract and hence you are being notified as under:

My client is working as CEO of X department and has full rights to exercise his powers.

You were working under my client as assistant manager. On the 1st of January, you submitted your application for causal leave of seven days stating that you had to resolve your family issues within that period. Although it was difficult for my client still you could avail the long leave as per your requirement.

As per the terms and conditions of the contract which was signed between you and my client at the time of your appointment, it was mentioned that a long absence from work could lead to legal proceedings. Since you have been accused of long absence without informing the company, apart from your leave period, therefore my client has the full right to start the legal proceedings for your non-compliance with the terms and conditions of the contract.

It has been more than a month and since then, you are absent from your work. It is hereby informed through this legal notice that you must report back to your concerned department within three days of issuance of this notice. Otherwise, my client will be forced to start the formal legal proceedings against you, and you may lose your job consequently.

(Name of firm sending legal notice on behalf of client)