Show Cause Letter for Behavior and Fight

Subject: Show cause for behavior and fight

This letter is being written to you because you have been accused of showing unprofessional and inappropriate workplace behavior, fighting with your colleagues and domestic staff, thereby destroying the calm and peaceful environment of the office by means of your acts. You were reported to show the same kind of behavior by your supervisors on many of the occasions and were issued warning letters also but unfortunately, no refinement in your behavior has been observed, and therefore company reserves the right to send you a show-cause notice through this letter.

On the 10th of November, you were witnessed to be involved in fighting with your colleagues at the company cafeteria. Cafeteria staff intercepted and tried to resolve the matter but you also harassed them and used inappropriate language which is not acceptable at all here in our organization. In the same kind of incident soon after the previous one, you were reported misbehaving with your supervisor while he was instructing you about an important matter. Further, you are famous among your colleagues for your ill manners, using mean language, and an inappropriate communication style.

In a worthy organization like ours, all these things are not tolerated at all. Moreover, all witnesses are against you. It was therefore decided in a meeting that you should be awarded a show-cause letter.

You are hereby advised to provide us with a solid reason within 48 hours of issuing this letter as to why disciplinary action should not be taken against you. If this time limit passes and you are failed to lodge any answer, it will be thought that you have nothing to present in your defense, and thereby, severe disciplinary action will be taken against you. So, take this show cause letter as serious and provide us with your explanatory answer through your supervisor. 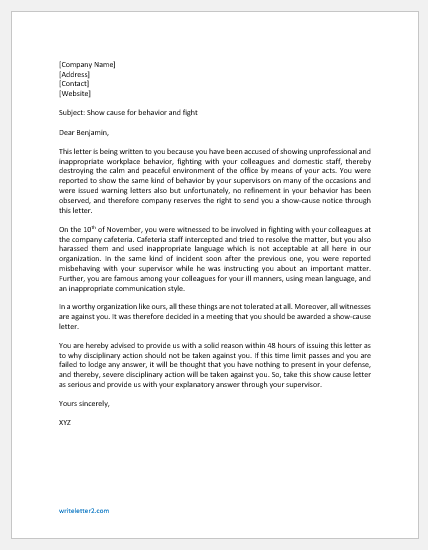 Subject: Show cause for behavior and fight

This letter is being issued to you after issuing a lot of verbal warnings from our side and in response to your inappropriate behavior which is being shown by you continuously. Yesterday, I received a complaint from your supervisor in which you have been accused of fighting with one of your colleagues and beating him ruthlessly, thereby causing him severe injuries. You have been given verbal warnings on similar kinds of occasions but your behavior is revealing that you have not taken these warnings seriously.

You must be knowing that within the office premises, you are obligated to maintain a peaceful environment during working hours. It was being reported by your co-workers that you have forgotten your obligation and were polluting the calm environment of the office by means of your abusive language and therefore, I personally conducted three counseling sessions with you. Yesterday, the situation became worse than before when you crossed the limits again and caused turmoil in the office during lunch break.

All these things prove you an unprofessional and ill-mannered employee. Management of this company does not tolerate such behavior from any employee and in a meeting this morning, it was decided that you must be awarded a show-cause letter.

You are therefore advised to meet me in the meeting hall at the company head office branch with your written explanatory answer reasoning why the company should not take any serious disciplinary action against you in response to your rude behavior. You are further informed that the answer must be provided within 24 hours of the issuance of this show cause letter. After this deadline, no excuse from your side will be entertained and you will have to face the consequences. 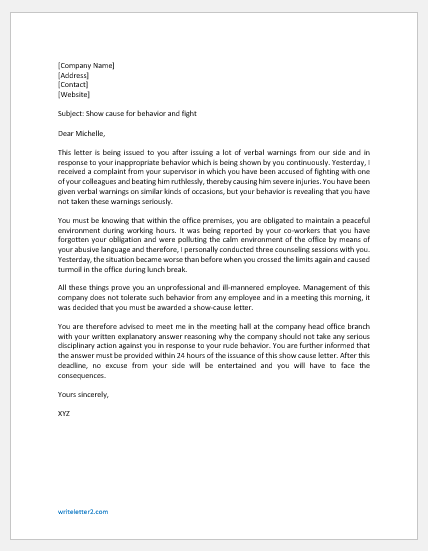