I appreciate your job of running the apartment which is very complex. I want to bring some issues related to the apartment in your attention so that you can take immediate actions to resolve those issues. The major problem which I am having in your apartment is the poor system. The blockage of drains and the leaking pipes may cause serious health problems to us.

According to contract, all the problems should be handled by the management of the apartment. I request you to have a look at above-mentioned issues and repair them at your earliest convenience. 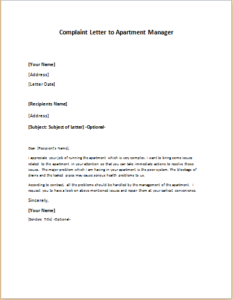