I am writing this investigation order letter in response to your complaint letter in which you have put blame on the assistant accounts officer for damage to one of the company’s assets. As per your report, it was stated that Mr. Johnson who is working as an assistant accounts officer in this company, took the company vehicle outside without permission and since he was drunk, he hit the vehicle with another car, causing severe damage to the company’s asset and an estimated loss of $[AMOUNT] has been reported.

No doubt, the accident of the said vehicle took place on the date reported by you but, I want to investigate this matter personally and for this purpose, I want to conduct an inquiry through an unbiased officer which is not in contact with the accused officer.

I, therefore, issue the inquiry letter of the officer and appoint Mr. Jackson, Assistant Director Litigation, as an inquiry officer. Meanwhile, you will supervise the whole inquiry procedure and send me the findings. So, you are hereby directed to inform him on my behalf and advise him to conduct a clear inquiry without taking any influence of either party.

The inquiry should also cover the aspect of whether the accused officer was drunk on accident day or not. For this purpose, his blood sample may also be collected and sent to a laboratory.

Along with issuing this inquiry order letter, I also direct you to complete the procedure within the minimum possible time and inform me about the findings through the letter so that exemplary punishment may be given to the accused officer. I am waiting for your report. 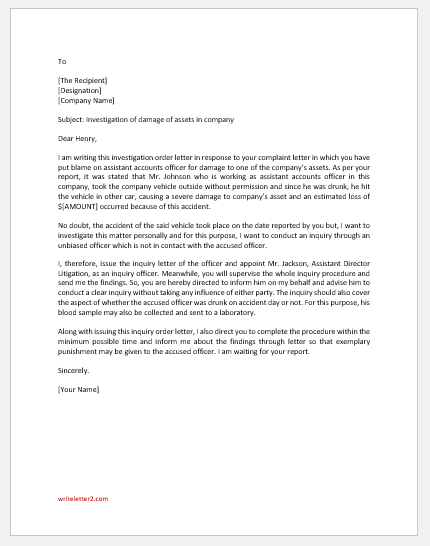 Subject: Investigation of damage of assets in the company

This letter of mine must be considered as an order to conduct the inquiry against Mr. Logan, who is working as a marketing officer in this company for the last five years. The sole purpose behind the initiation of such inquiry is to find out true facts which are still hidden behind the story of his fight with his office colleague, Mr. Lee within the office premises in which two costly laptops were also broken.

It was also reported to me by one of the witnesses that the said officer was looking as if he was drunk when this incident took place.

Before announcing my decision, I want an inquiry to be conducted against Mr. Logan and Mr. Lee. For this purpose, I hereby appoint Mr. Hayward, working as director enforcement in this company as inquiry officer and you are directed hereby to inform him on my behalf.

Since I will be out of the country for my personal work, therefore, I direct you to supervise the whole inquiry procedure making sure that the inquiry must be clean and free from any interference.

I shall be back within a week and till then, I want this inquiry to be completed in all respect and findings may be submitted to me by that time.

I advise you to supervise the whole matter honestly and inform me about the findings by the time I arrive back. If needed, blood samples of the accused may be collected and sent to any analytical lab for alcohol usage. I hope all the points will be taken into consideration while conduction of inquiry procedure. 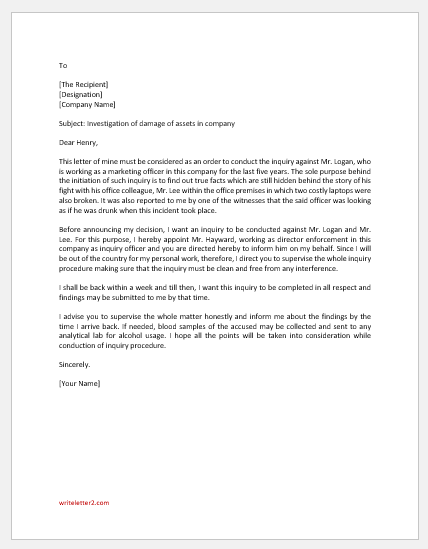