I am jotting down this letter as a complaint about the delay in project completion on behalf of my teammates. As you know that we had our project ongoing with you that was signed in August 20XX. Six months have been passed now but no developments have come to see till now regarding the project. It was mentioned clearly in the contract and according to your demand 40 percent had been credited to your bank account in advance and it was credited even before the deadline given by you.

You had to start working on the project on the 10th of last month. You were well aware of the details that were stated clearly in the contract and you were also well known for its consequences in case of non-compliance.

Now three more weeks have been passed but still, the work has not been started on the site. You are now supposed to accomplish the assigned project by the 15th of July as mentioned in the contract.

Such kind of irresponsible attitude is not bearable in company’s premises and neither have we expected it. Your company has an esteemed reputation in the town and it is very saddening for all of us that it is lowering to this. I was not contended to send you this complaint letter but if the same practice continues then it will be impossible for us to start the new project. The project that is about to start after this project and the loss that will cause because of the impediment in the coming inspection.

Please start commencing on it as soon as possible or else we will be constrained to draw out our deal with your company and will hire some other company for the same purpose. I hope you will keep in mind what is said to you. Thank you. 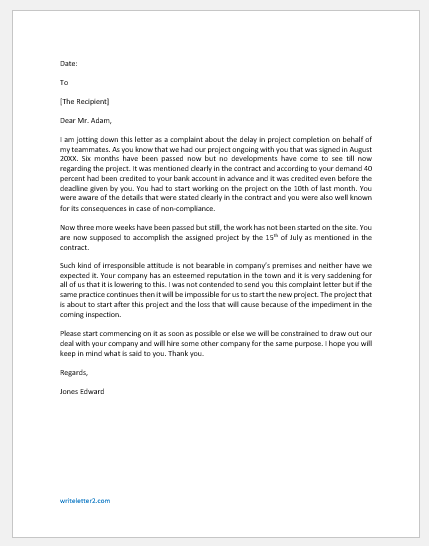 This letter is to bring to your notice that we had the ongoing project and it was between your company and my company. The project was decided to be accomplished by 30th May and that date is approaching swiftly. It has come to my notice after a thorough investigation that a lot of work is still due with some bits and bobs. According to the contract between both of our companies, this situation will pave the way for non-compliance. You were fully aware of the outcomes that might result in a case of delay.

This thing has also been reported that your team members were not working adequately for last four weeks. Therefore, to send this complaint letter to you was the need of the hour so you may enhance your abilities and manpower that are required to accomplish the due work in time. Your company is one of the renowned companies in the town and this thing is hard to digest that it is lowering down.

We expect professionalism from your company. If the same continues to occur, then the upcoming project signed with your company will be canceled. I therefore highly advise and recommend you negotiate the matter as soon as possible to elevate the pace of work according to an agreement that was between our companies. I expect prompt action from you in this consideration.

I had also complained to you about all this in the letter that was sent to you previously in January. For your remembrance, I have attached a copy of that with this letter. Kindly concede this letter by giving an adequate and timely reply. Looking forward to a positive reply from your side otherwise, this project will be convoluted.