It is solemnly stated to notify you about the fact that there have been many instances where the security officers and guards on duty have been found acting carelessly during their duty hours. You had been hired by our brand manager as he knew you quite well in terms of interactions and for the sake of old times. He insisted on the point that you would be interviewed and hired by the branch manager himself and that I need not worry about the security issues anymore.

However, for the past month, I have been receiving complaints about the carelessness done during duty hours by the guards of the showroom.

One car was to be allotted to the client after his complete payment but when we checked the fuel tank, it was almost empty as though someone had taken the fuel away from the tank. Then the security cameras were checked and two of the guards were seen messing around that car in the CCTV footage which proves that this heinous step has been taken by them.

Other times the walkie-talkies were used by them unnecessarily while it was only to be used for official security purposes and not for personal messaging among each other.

Moreover, a mysterious van has been seen by the police in the last 3 nights for which the cops are now doubting our security team for not keeping it away from the area.

All these acts of carelessness prove that you, being the senior security officials have not been accurately keeping a check on your subordinate workforce which is very disappointing.

As a result, you and the whole staff working under you would be severely dealt with by deducting the salary into half of your current salary amount for the next two months. This is according to the policy set by the company owners for such negligence and this is not done on grounds of a personal grudge.

As the CEO of this branch, I am answerable to my bosses in the main headquarters hence I cannot spare you after a couple of repeated warnings issued. I hope this would bring a positive change in the overall performance and strengthens the security of the showroom manifold. 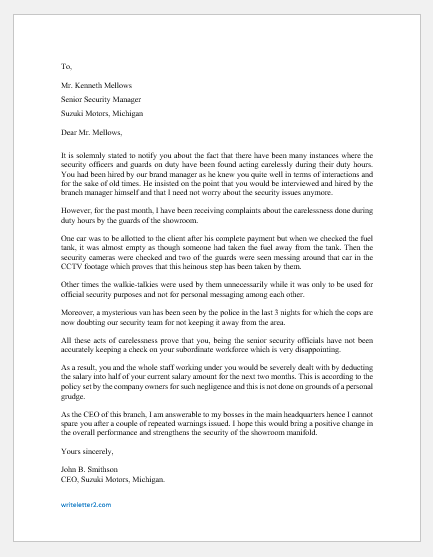 
2- Letter to customer services manager at a mart

It is hereby stated to notify you about the fact that you have been awarded a negative grading on work performance. There has been seen and noticed acts of negligence under your supervision by your subordinate staff members on duty timings when they should be serving the customers at the mart.

You had been hired 6 months ago from now and you proved to be responsible and experienced sales representative manager.

For the last 2 months, it has been seen as a frequent activity that your staff is rarely on their fixed spots to assist customers, rather they gather at one corner, leaving the customers unattended and they eventually get themselves lost in the huge mart.

Also, despite the CCTV cameras fitted at each interval of the mart, certain shopliftings have also been reported that the young children do unintentionally and are later caught before they leave unpaid. This is a point of embarrassment not just for you or me, but on the whole, the reputation of the mart is getting negatively affected. This negligent attitude would not be spared now after issuing a couple of warnings. Mega Mart can simply never afford to dismantle its reputation among its customers who have made it to such heights of success.

Hence, the CEO of Mega Mart has decided to deduct the salaries of your team and your own salary for the next two months. This would expectedly improve the poor performance given by your subordinate team members. If the negligence continues, the authorities might not hesitate to fire the whole staff under you, including you. This is why you really need to pay full heed to your job performance and role play. 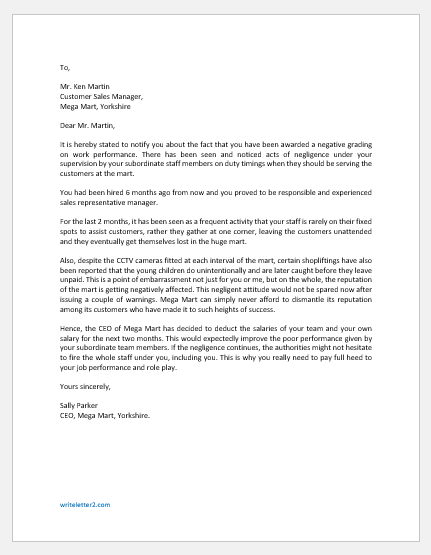