I am writing you this letter in response to a bulk of complaints against you by your manager. Yesterday, while viewing performance evaluation reports submitted by the manager, I came across yours and found that you are continuously showing poor performance at the workplace. It was revealed to me that you have failed to maintain that quality standard in performance which we usually require from our employees.

I still remember that time when I appointed you as an accountant in my company thinking that you will prove yourself as a beneficial and worthy asset. It has been reported to me by your manager that you are inconsistent in performing routine official work, thereby maintaining the suboptimal standards in terms of your performance.

Moreover, due to lack of concentration, you are famous for not completing the assigned task on time and hence you fail to meet the deadline all the time. Apart from all this, you have failed to earn a good repute in the office because you are non-cooperative with your colleagues and not follow your manager’s directions.

Despite issuing you many warning letters, you did not change your attitude towards your job. But the situation has now become alarming. We do not tolerate such employees who are poor in terms of their job proficiency. But I want to listen to your side in order to decide about a possible solution to this matter.

You are hereby directed to submit me a suitable explanation for your poor performance. Based on your explanation, it will be decided either any action should be taken against you or not.

You have 48 hours for explanation, and I am waiting for your answer. 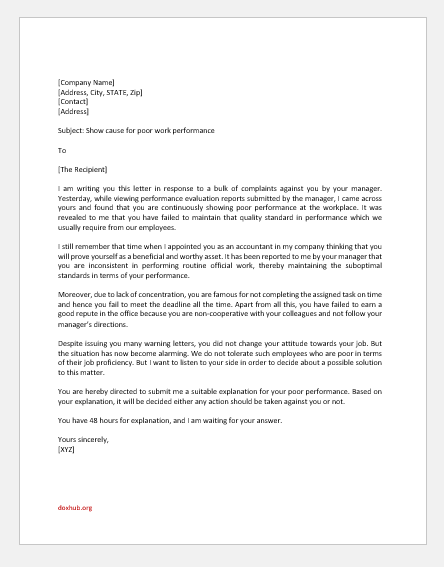 Yesterday, I was greatly shocked after reviewing your performance report submitted by your manager in which he has informed me that you are continuously showing poor performance for the last four months and have thus failed to maintain the quality standard which we usually expect from our employees.

He has observed that your performance has been unsatisfactory and you are behaving unprofessionally in terms of not completing the tasks on time, preparing faulty reports and due to this particular mistake of yours, the company lost many important projects and had to bear great losses on many occasions. Moreover, you have been reported to neglect your manager’s directions and act aggressively with your colleagues as well.

Mr. [X], the above-mentioned report is sufficient enough to prove you an unprofessional and I have got enough evidence to remove you from your job right now. Completing work on time without mistake and meeting the deadline is the quality trait that is found in a professional employee. Your poor performance is a clear indicator of the fact that you are devoid of this characteristic and that is why you have not been able to produce that quality in your work. You were also issued many warning letters, but you did not take any of it as serious and continued with your unprofessionalism. We usually do not tolerate such employees and terminate them immediately.

You are hereby directed to submit your answer in the form of a written explanation for your poor performance at the workplace. After considering your explanation, I will decide which kind of action should be taken against you to put you back on track. For this purpose, you have 48 hours. If you fail to explain, you will be at high risk of losing your job for not complying with directions. 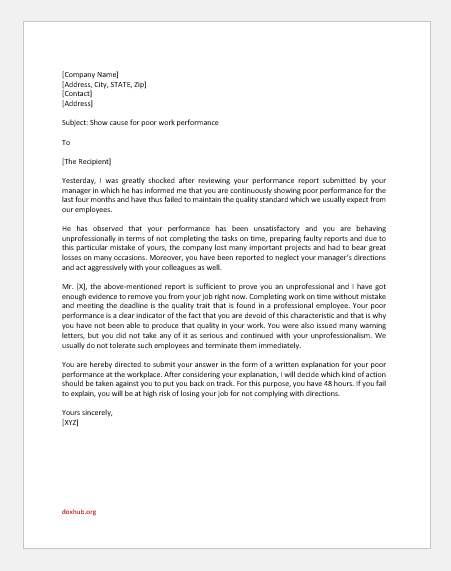