What is a theft report letter?

A theft report letter is a letter in which a person reports against the person who is stealing. It is a systematic and well-ordered letter of facts and findings of an act of theft. This report letter also works as evidence against the thief.

A theft report letter must contain vital information that allows a recipient to make a decision based on the evidence delivered. While making a report letter, also attach other documents that tie up HR’s time and attention. Therefore, a letter should be persuasive that can allow the reader to read the letter through the end.

Following are the instructions that are used while writing a theft report letter:

It is not easy to keep yourself safe while accusing somebody of a crime. You must need to stay confident in any case. Provide evidence of the incident and tell the complete story.

It is important to come up with all the important happenings of an incident. Try to collect as much information as you can before reporting. However, if you are not sure about the crime or lack evidence, do not put yourself at risk.

Do not make a wrong claim against anyone

Making a forged claim against someone is unethical. It is important to be the witness of the event. Do not trap an innocent person because of your doubts. Make sure to confirm the identity of the stealer and then write a report letter against him.

While writing a theft report letter make sure to attach evidence and other documentation about the theft. Consequently, it will become easier to nip the evil in the bud.

Always remember, you are the one who is reporting the event to HR. Hence, do not forget to put your name and contact details in the letter. It will help the authority look into the matter and contact you for further details if necessary. However, if you will write the letter anonymously, HR will not consider it on priority.

I am writing this letter to you because I want to report an act of theft that happened in our office. I noticed that some important documents and files are missing from my workstation for the last four days. At first, I did not take any action because only some quotations were missing that were not significant.

Yesterday, I was making an important presentation for our upcoming project. I needed some important letters and documents to add to the presentation when I came to know that the lock of my cabinet was broken. The documents were missing. I reported this event to the office of security and asked for CCTV footage of my office for the last week. They provided me with the footage. I have attached the footage with the letter for your reference in which Mr. XYZ can be seen breaking into my cabin. In the second picture, he can be seen with the documents.

I am reporting this incident right away. I hope that you understand my situation and take the necessary action as per the organization’s policy after the investigation. Stealing is an immoral act and we cannot expect this from professionals. I hope you will look into the matter and take some action against it. Waiting for your response. In case of any query please do not hesitate to contact me. 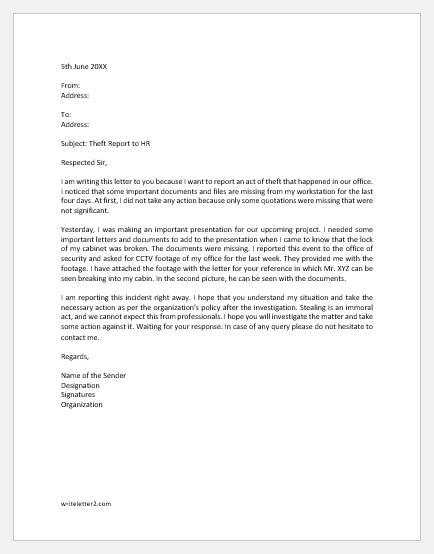