Warning Letter for Allegations on Engineer

Re. Warning against the Case of Allegations on Engineers of REDYA Groups

I am writing this letter with reference to the contract which was signed between our companies on the GRoW project. The project was meant to make two nuclear buildings for educational purposes in teaching language and Business skills. This project was co-initiated by the investment of engineering from our company and the rest at your company on certain shares and profits.

It is seen that the members of your company are trying to put the entire allegation on our engineers which is an attempt to defame the company and leave it notorious. Your members have been found blaming our engineers on different TV channels and magazines which is unacceptable.

We expect an apology letter from you on this and a clarifying statement to the media negating all the previous statements. In other cases, our company shall use legal proceedings against you for this heinous act of defamation under the Defamation Act of USA Law.

Our staff members especially the engineers are very competent, well trained, and exceptionally talented and they have no concern with the material used in this building as the agreement was just to use our engineering services and not the construction tools and supplies. It is also written in the agreement that in case of any alteration in the map, no responsibility would be shared by our company. I hope you will take an action holding the above-cited facts and explanations. 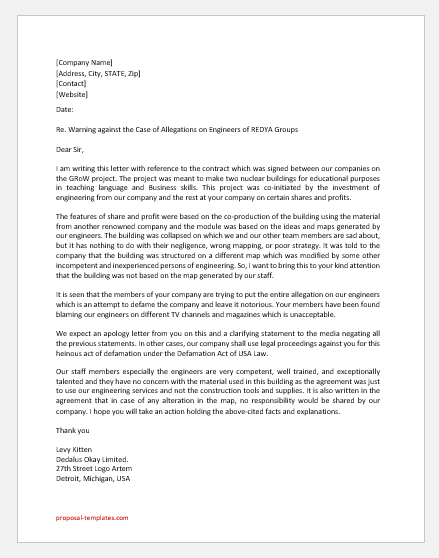 Re. Verbal Warning for Blaming Engineers for Wrong Mapping

I am Antonio Rey from the HR Department of SKM Constructions and Shippers. I work as a Senior HR Manager and Clientage Dealings. I am drafting this letter to you with reference to the contract which was clamped between your company i.e. James Huntington Rows and ours i.e. SKM Constructions and Shippers. According to that contract, we acted as half vendors in this contract with your company. According to this agreement, your company was hiring our engineers for the upper part of the building to add four more stories.

The agreement was signed on 31st October 2020 and it was to be executed from 3rd November 2020. The contract was to hire the engineers and to pay for it. We are sorry to hear the loss you had to bear with the fall of one story of the building recently made but it has nothing to do with the engineers but can be related to material and labor. As it is evident from the agreement that your company was not using our construction material but only engineers were sent for this construction map and methodology module purpose. The map which had been supplied by our engineers was modified to a large extent by the other members of your company and the other crew you hired for the material.

Now after the collapse of one story, your company has been threatening our engineers for this mishap and blaming them as responsible for this happening. Your company is asking our engineers to work for them for another month for the recovery of the building as compensation.

This letter aims to warn you to not blame our engineers as the reality is ambiguous, but it is evident that our engineers did not make any mistake in this regard. I hope you understand the real case and will stop putting allegations against our engineers and threatening them otherwise a legal stance shall be taken to cope with the situation. 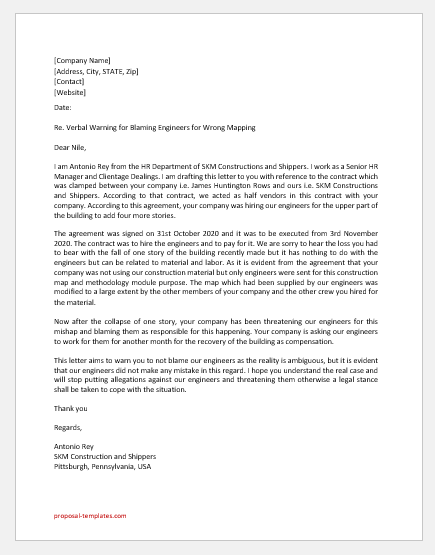