Fulfilling your everyday duties like a drill is not the sole demand of a company. Carrying through the job while staying within the legal boundary is the fundamental duty of an employee. While the employers appreciate their workers performing their daily tasks without creating a mess, they are also entitled to take account of workers ignoring lawful instructions.

Normally, when an employee deliberately misses or forgets an instruction, he/she is reminded verbally in a lenient manner. However, if the boss realizes that his employee has become habitual of it, he/she is then addressed through an official letter. The letter is written to bring it into employee’s notice that he is being monitored and it also serves as a warning for not repeating it again.

It includes the penalty the worker would receive in case such an action happens again. Sometimes there is only one warning letter without any prior verbal notice and the individual is simply fired if he does it again. It mostly depends on the nature of the instruction he/she ignored.

However, in most common cases, the worker is given a verbal reminder followed by a warning letter. When he/she shows diligence and perseverance, he is not further approached on the matter as the department gains its confidence back on its choice. On the contrary, when the employee does not pay any heed to the warnings and carry on with his/her careless attitude, a termination letter is sent to him without any further delay.

If you are an employer or hold a position of monitoring the workers, you may be asked to write a warning letter for ignoring lawful instruction to your employee. You should know a few facts while crafting a draft on the subject matter.

Following is a sample warning letter to employees for ignoring lawful instructions you can take notes from. The information is subjected to change according to your particular situation.

It has been brought to my notice that you are continuously ignoring your HOD’s lawful instructions which are bringing about harmful consequences to the company. You were verbally approached before by your supervisor and requested to alter your professionalism.

It is, however, quite unfortunate to know that instead of reckoning your mistake and correcting it, you are still repeating it.

While the company appreciates the hard work, you have previously done for it, we will have to still warn you about the recent display of carelessness from you.

Consider this your last warning and mend your ways. You can reclaim the status you had in the company. We, at the administration, truly appreciate employees that are ready to learn and grow.

Should you have any queries regarding the subject matter, feel free 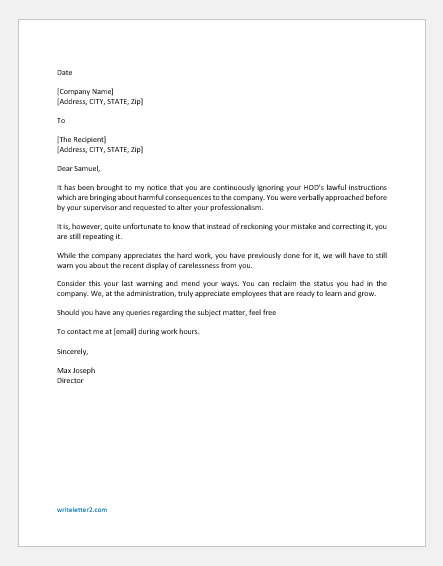