Following etiquette is very important as it shows our personality. The use of gadgets is becoming common in such a way that people are talking and meeting other people while using their phones. This gives an impact of ignoring the other person. Listening to someone with attention is like giving respect to them.

Promise the person to not use a phone at work or meeting and abide by any rules and ethical behavior. Ensure the person that you were attentive to their words and were not being ignorant.

The meeting held yesterday meant a lot for everyone as we had to finalize the new deal with the client. I was very attentive during the meeting and I was all ears to the important aspects of the deal. I am aware of the company policies and I know that they are meant for our own benefit.

I have realized that I have become reliant on the technology and gadgets. Sometimes I feel, I cannot live without my phone. Checking my social media accounts has become my second nature now. I must think of a plan to somehow control these habits as they are coming in my way of becoming more productive.

However, yesterday the matter was different. My wife must see the doctor due to some serious illness. I was waiting anxiously to hear from her. And so, I was checking my cell phone every now and then. I accept the fact that everyone was feeling distracted due to my excessive use of the cell phone. Taking away my phone from me was the best solution as I would not have been able to stop myself otherwise.

Please accept my apology and be sure that I abide by the company policies and avoid the use of cell phones in future. 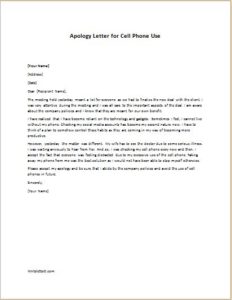