Any institute or organization has expectations from its employees to perform in a better way. The development and progress of the company depend on the employee’s performance. Each company has different merits for its employees to perform. With the provision that the sales department is perturbed, keen attention is paid to the productivity of the company because sales bring direct earnings.

The progress of the company depends on the employee’s performance; the lack of performance will put drastic impacts on the company’s progress. The employer to solve the issue sends letters to employees in spite of stiff action and the letter is directed to the sales manager.

The reason for the sales manager not performing well can be of numerous forms. Some possible reason for it might be that the concerned person was not able to meet the targets of sale. Secondly, his way of dealing with clients was not satisfactory and he was not capable to attract clients.

Thirdly, the sales manager did not hold on to existing customers and he was not proficient enough to tackle the sales team productively. The behavior of the sales manager with clients can also be the cause of poor sales performance.

Fourthly, coworkers can also complain against the sales manager about his poor performance.

In short, all these can be the reason for poor sales performance. If poor performance has been done by the employee, then the employer and administration can take serious action against that employee and it also serves as a reprimand letter.

For sending this letter you must write in detail the particulars of the concerned employee and the reason for sending the letter. Then you can move on by writing your presuppositions from the salesperson and later on you can move on to consequences of repeated inefficiency and underperformance. The benefit of sending this letter is that the salesperson takes this warning seriously because these things come under the official record of the company and he then tries to evaluate his performance.

Re. Poor Performance shown during [X]

The purpose of writing this letter is to call in attention the bad execution of the sales department along with you being the manager of the sales department. As per the estimation of the last three months’ performance, there is an inconsistency of 56% actual sale and cut-rate. The reason for all this is your negligence towards work and you wholly are responsible for this. The company is already suffering a lot due to the pandemic and its profits have lessened as well.

You have been working in the company for the last seven years and you have performed exuberantly in these years. And now the day you have promoted to sales manager rank, your performance is getting down and down and it’s affecting the whole department. This thing puts us in doubt about your administrative ability. If the same continues then it can have drastic results on the company as well as your termination from the job. I hope that you will start improving yourself by taking this warning seriously. 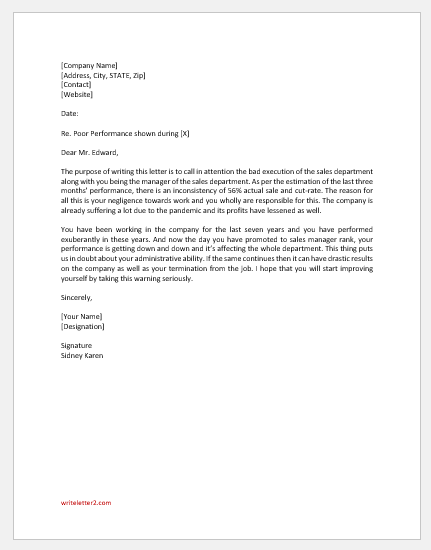