In the corporate world, non-compliance is the inability or failure to complete a task assigned by a client or the authorities. Non-compliance can put you at the risk of jeopardizing your reputation, losing a contract, or even being terminated by the company. Usually, it’s a combination of factors that affect the outcome and not the responsibility of one person. If you have been non-compliant regarding or a task or service you were given, then the best strategy would be to write an explanation letter to the authorities stating valid reasons which led to this non-compliance.

An explanation letter must state reasons that were beyond your control and the ones that can justify the non-compliance. For example, if you were given a contract for construction, then you can state limited funds as a reason for the task to not have been completed within the given time frame. Similarly, any personal reason like the loss of a family member is also a valid reason which can affect the work of an employee.

Always keep in mind that the company has every right to take action against you in case of non-compliance. Make sure to write a convincing letter that can explain the reasons to your employer or your contractor.

Following are important points to consider while writing an explanation letter for non-compliance.

Following is a sample explanation letter for non-compliance

I am writing to inform you that the construction task given to us on 1st August 20XX could not be successfully completed after 45 days as promised. Due to some unforeseen circumstances, the work got delayed and we now request an extension of the contract till the end of September 20XX to complete the task successfully.

I would like to mention that the time of 45 days was proposed keeping in mind a team of 5 employees and 10 work hours per day. However, due to the severe illness of one of the employees and an occupational injury of another, we were short on staff. The work got delayed as there were fewer hands on the job. No other trained personnel were available immediately to replace those employees.

Moreover, an important machine on the construction site was damaged due to a hailstorm on two occasions. The shaft of the machine was destroyed which took a lot of time to fix. This led to much of our funds being used up on the repair and we were left with a sum that was not sufficient to buy the supplies needed.

We apologize for the delay caused but we assure you that we are back on track and will finish the task within the next two weeks. We request you to please send some more funds, details of which are attached therein.

Thank you for your time and consideration. 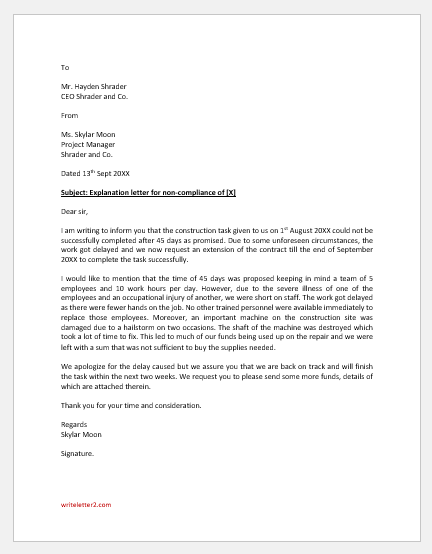