A complaint letter is written to formally address any grievance, fault, or non-satisfaction regarding any product or service. Complaint letters should not open up with a threatening tone rather it should show your concern regarding the unsatisfactory product or service you had received so that the other party may make improvements in it. The addressee of the letter should state the complaint clearly and concisely. Exaggeration should be avoided.

Complaint letters are written to make the concerned individual aware of any wrong-doings or any un-satisfaction delivered from their end. The best approach to use should be highlighting the issue being faced and moreover showing concern that if this continues, it will create problems. As it is humanly possible for an individual to make mistakes. A positive approach towards resolving the issue is highly appreciated by anyone.

This is to bring into your kind attention that the new sweeper on work is not doing his job properly. I have been living in the South West apartments for the past 10 years and have throughout enjoyed a healthy living environment. The new sweeper you had just appointed does not do his work fairly. He collects the rubbish in one place and does not bother to pick it from there until said. Moreover, he does not brush properly. He leaves behind the rubbish and moves on.

I had earlier talked to him about this but he had paid no attention to it. I don’t want to make matters worse so I request you to please take notice of my complaint and take due action as this is causing an unhealthy environment. I will be thankful to you. 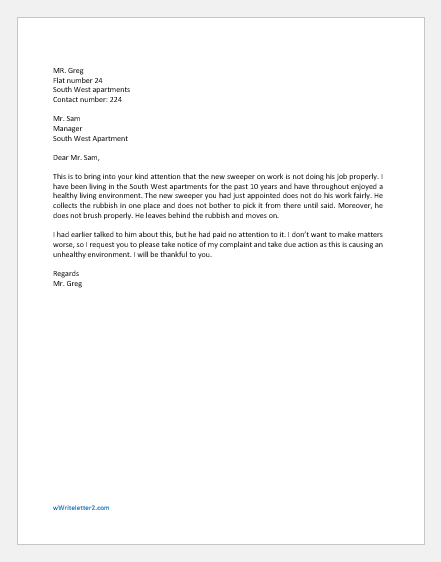 Subject: Complaint letter against sweeper of the society

We, the inhabitants of Alexandria Society, want to submit you through this letter, a formal complaint against the sweeper working in our society. His careless attitude has made the environment of society filthy and unhygienic. Instead of collecting and dumping the garbage in one place, he throws it here and there in the streets. Drainage and sanitary condition is horrible and one can find stacks of filth lying everywhere. Moreover, he fills the alleyway with rubbish, resulting in the foul smell which has rendered the air polluted around us. This filth coupled with poor drainage acts as a good breeding place for mosquitoes, particularly during the rainy season.

Before writing to you, we talked to him by ourselves and warned him not to show negligence in his duties. Instead of admitting his mistake, he demanded extra charges from us. Why should we pay him extra money when we pay sanitary charges to the concerned authorities?

Keeping in view our problem, you are hereby requested to resolve the issue on a priority basis. It is our sincere suggestion to change the sweeper with a new one because we want to provide our children clean and calm space and instead of breeding houses for mosquitoes and other germs. If our concern remains unaddressed, we shall be forced to write to higher authorities. 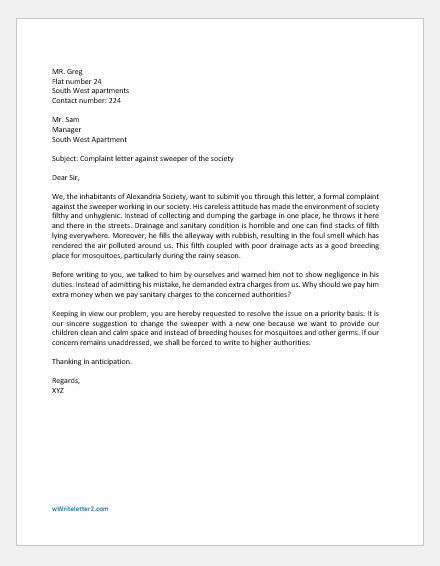