Suspension Letter to Employee for Indiscipline

This letter has been written to inform you of my decision of suspending you from your current position {Enter Designation} for twelve working yet unpaid days. This decision has been made unanimously by the disciplinary committee of the company {Enter Company Name}. The reason behind this decision is not unknown to you as we are sure of it.

There have been complaints about you regarding some co-workers who feel uncomfortable in your presence. You have been warned many times directly or indirectly to redeem your behavior, but it did not happen till the date. We showed you mercy keeping in view all these years of your hard work and dedication and did not fire you even though we had reasons for that. Instead, we gave you a final warning in the form of this suspension letter, which, if not taken seriously, will surely result in some irreversible action.

You might as well be called in person to show up in front of the disciplinary committee for a thorough explanation. 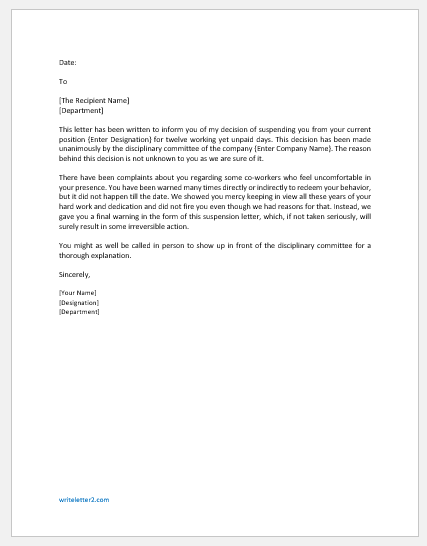 This letter serves as a suspension letter to you. You have been suspended from your post {Enter Designation} for a span of ten working days which are going to be unpaid.

It was brought to the light by the HR manager that you have been showing up late for the office for quite some time from now and despite getting several verbal warnings, you did not mend your way or came up with some real reasons for that. Being a part of our renowned institution, {Company Name} you should know the importance of time and regulation. Moreover, this is clearly mentioned in our appointment letter that we do not allow more than three late comings and otherwise, your one-day salary is deducted on every late arrival.

But sadly, nothing could regulate you to be on time and now it has become a kind of a routine matter for you. It is also said that you never come up with some genuine reason for always being behind the schedule. You are advised to redeem your attitude during this time of suspension and appear before the disciplinary committee at 2 pm sharp tomorrow since you owe an explanation to them.

We really wish to work with you in the longer runs but not with this unprofessional attitude for sure. You have been a real asset for the company and we always adored that but to take this for granted is forbidden. Hope to see some real change in no time to avoid your dismissal from the post. 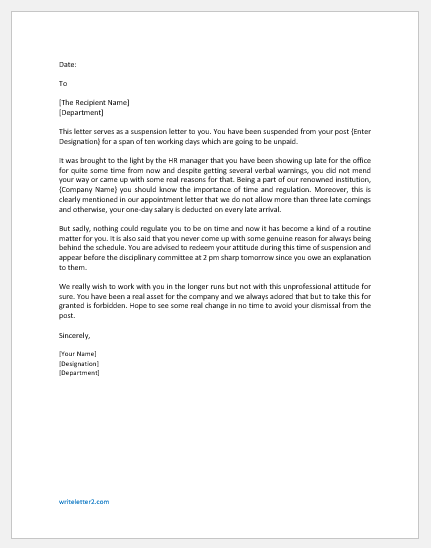