There are many conducts that are against a company’s guidelines. In order to know about those guidelines, all employees should know the company’s policies to avoid any future miss happening. Following are the most common behaviors and misconducts that almost all companies do not allow in their workspace;

What should be mentioned in a warning letter?

This letter is written to highlight an issue of your aggressive behavior with fellow colleagues. It is not for the first time that I have received this complaint against you. Many other employees are also disturbed by this behavior of yours.

I am issuing this letter as a warning to you for your aggressive behavior.

You are expected to mend your behavior and seek counseling at [X]. The first session of counseling has been arranged for you on [DATED] and later you can fix on your own schedule.

In case you are failed to improve your behavior after the given time or any complaint registers in your name the matter will be taken seriously for a final decision.

We hope a better [Employee Name] in coming days.

[Your Name]
[Your Designation] 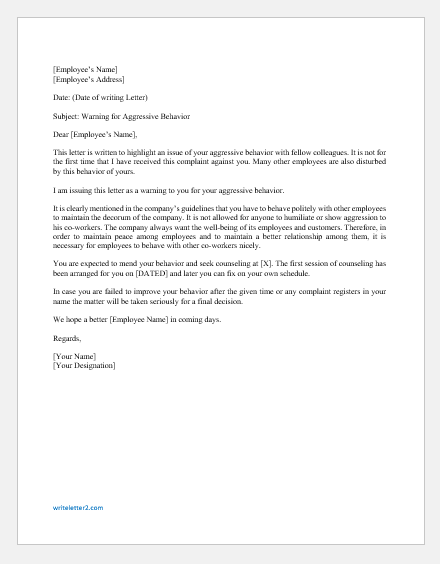