Warning Letter for Not Respecting the Dress Code

I was forced to write this warning letter when yesterday, I received a complaint letter from your supervisor in which he has put various allegations on you. Most prominently, he told me that you do not follow the dress code set by the company.

Coupled with this bad habit, you have also been witnessed at various times conducting bad behavior with your colleagues. Such misconduct was not being expected from your side as you are a senior employee of the company now. You should have set an example for your juniors showing excellent behavior, but your attitude is showing that your graph of morality, cleanliness, and professionalism is going down and due to this reason, you have created an alarming situation for yourself.

You were also given a handbook containing company rules and regulations. It is clearly mentioned that poor cleanliness and breaching the dress code is sheer negligence and will be dealt with in a strict manner. Mr. Meezo, cleanliness and proper dressing is a sign of professionalism, and being one of the worthy organizations of the country, we want our employees to maintain a healthy, peaceful, and calm environment and this is only possible when there will be a standard of cleanliness coupled with proper dressing.

Such negligence attitude leads to harmful results which might be in the form of suspension or termination from the job if continues for a longer period. But, considering your seniority in the company, we want to give you another chance to bring a positive change in your behavior. So, you are advised to take this warning letter seriously and refrain from such activities in the future. If you are found not following the dress code, consequences would be hard in that case. I hope you will show a level of morality and professionalism from now onward. 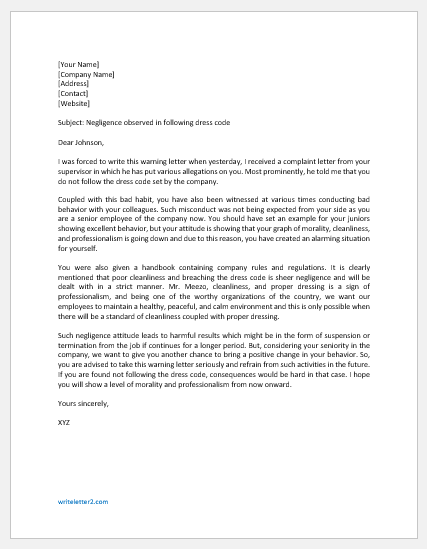 My name is Jackson and being the CEO of this company, I have full rights to issue this warning letter in response to your negligence and unprofessionalism which took place in the form of breaching the dress code of the company.

During my visit to your office last Thursday, I observed that you were dressed in jeans, a T-shirt, and joggers. I was highly surprised to see this much negligence from your side. Your manager also complained to me that was not the first time when you breached the dress code. Remember, you are one of the senior employees of the company and such negligence was not being expected from you. Such kind of dressing is feasible only in case of a company trip, but you were present in the office during working hours.

The company has issued several circulars in this regard that an employee needs to be dressed in dress pants, a shirt, and a necktie.

As per the rules of the company, if an employee violates the dress code despite warnings, he would be dealt with strictly, and his salary could also be deducted on account of a serious violation. But in your case, considering your seniority in the company, we have decided to warn you by issuing this warning letter.

You are hereby advised to take this warning letter seriously and follow the prescribed dress code of the company. Further violation of such type will be dealt with according to strict rules and no excuse will be accepted from your side in that case. Waiting for a positive change from your side.