Complaint Letter against Boss for Harassment

Good day. I am writing to inform you about a harassment incident that happened with me recently at the office. As a matter of fact, our team manager and boss Mr. William Jenkins has been harassing me for the past two months.

I feel embarrassed to write about this to HR, but I have been left with no choice. He passes improper comments at me and other females in the office and sends me unprofessional messages outside work hours.

I have tried to resolve the matter on my own by talking to him and warning him verbally but to no avail. Mr. Jenkins continues to do the same things repeatedly and pays no heed to my verbal warnings. Other male co-workers have also tried to explain the gravity of the situation to him but he has made no attempts to improve his behavior.

He is my immediate boss and therefore I have to visit his office multiple times during the day to give him work updates. Every time I visit him, he attempts to harass me one way or the other.

This has severely affected my work and I am unable to concentrate on my job. I avoid going to his office to report work updates to him which results in us lagging in our project.

I request you to please investigate this matter and give him a warning. Alternatively, I also suggest to please move me to another department, so I do not have to interact with him anymore.

I look forward to hearing from you 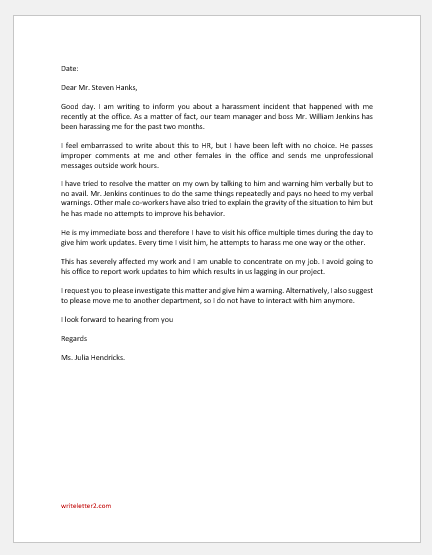 With a heavy heart, I am writing this letter on behalf of all the female co-workers of the sales department to make a complaint against our boss Mr. Billy Cobalt. I regret to inform you that he behaves very inappropriately with the female employees of our company and continues to shamelessly harass them in front of all his colleagues. He also has a biased attitude towards certain workers and grants them extra leaves and other incentives which he completely denies to the rest of us.

He comes to work quite late and pays no heed to any of our feedback regarding the project. The harassment incidents have been going on for weeks now and many females have reported against his behavior.

Recently he has been involved with a harassment incident with one of our colleagues, Ms. Anna Stone, when she was working overtime. She filed a complaint with HR earlier as well but so far, he has not been issued a warning from the office. We have been informed that Mr. Billy has a history of harassment and has had several complaints made against him at his previous work as well. We request you to please issue him a warning or to change his department as his behavior is affecting the work environment. We look forward to your response. 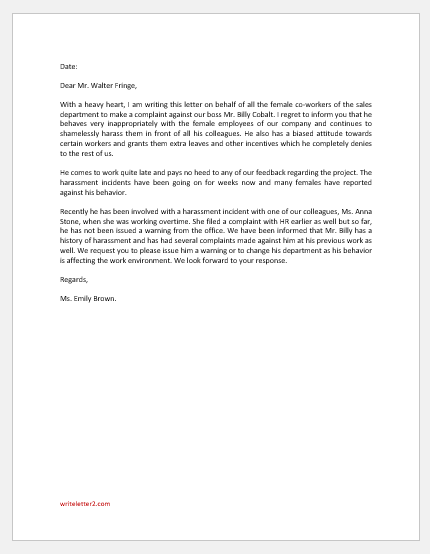