Explanation Letter for not allowing Participation in Competition

Dear Mr. Robin, I am much grieved for not allowing Hetty to participate in the final round of the debate competition that was on the 3rd of this month. I was much happy that he got the first position in the first two rounds and illuminated the school’s name on the higher level. I always appreciate him for his endless efforts about the study and he is a very keen observer and presents such ideas in the class that for a moment keeps everyone in shock that students at this age can talk like this. His knowledge about literary books is above all and once he was appreciated by the principal when he related class lessons with the poems of John Keats.

I am writing this letter to say sorry to you for not giving permission to Hetty for the final round. He was not much well prepared for that day and was confused a little. He talked with me personally about this and when I listened to what he had prepared, there were so many mistakes in it, and he was repeating the same words again and again. I discussed this matter with the school principal, and we concluded that we will not let Hetty perform today. As this was a matter of his sake as well as schools so better was to not allow him for all this.

I have mentioned the circumstances that were the reason behind his dropping out of the competition, but I promise that next, I will prepare him fully for any kind of competition. This is what I had to say to you, and I hope that you will understand. You did the same if you were in my position. If you want to ask more about it you can contact me on my number [X], but make sure to text me your name before you call. Thank you! 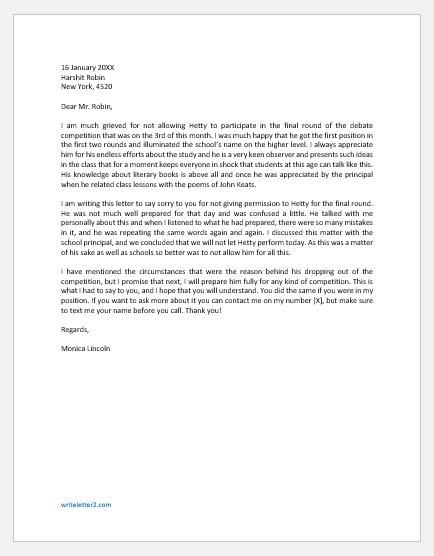 I am Christian Medina, the class teacher of Eliza Michael who is a student of grade 7th at ABC school. The purpose of writing this letter is to discuss the matter with you about the final performance of Eliza. I am so much grieved for not allowing Eliza to participate in the competition, but there were some obvious reasons due to which I did not give her permission to sit for the competition and I will mention all there.

Firstly, Eliza was absent on the rehearsal day and we had to make a final judgment on that day based on the final performance. Secondly, she was not physically fit for this as due to a fever she was falling again and again. So, due to all this, she was not coming fit in any criteria. I did not want all this to occur, it was my heartiest wish to see her participating in the final performance but unfortunately, luck was not with her that day.

Moreover, if I allow her that day to dance then it was also risky for my job as well because the management could expel me from my job. Anyways, I am grieved for all this. If next time, the school organizes such kind of event I will accommodate her, but for this time I’m sorry. I hope that you will understand what I have mentioned above. If you have any questions regarding this in your mind, do not hesitate and feel free to contact me. 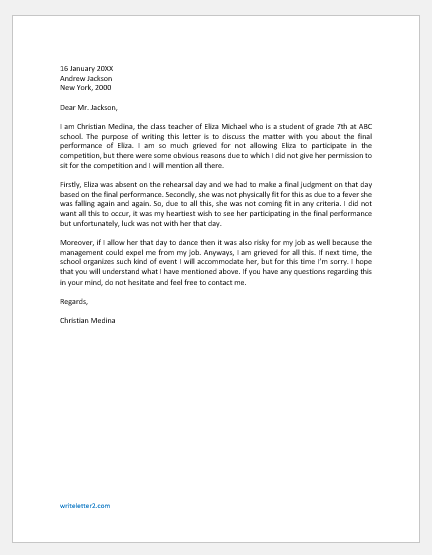