Leave Letter to School for not Feeling Well

With all due respect and regards, it is stated that I am Samantha Mathew from the class IX-HE of the Home Economics Department. I have been a student of Union Arts High School for a year now and I aim to master the subjects after studying their basic stages.

Madame, for the last couple of days I have not been able to attend classes due to bad health. I had a dine-out with my extended family gathering three days ago which made my stomach go upset with recurring vomits, nauseating feelings, and indigestion with extreme intestinal pain. This stomach issue led to a fever of 102 degrees Fahrenheit. Ever since I could not even move from the bed and have been suffering constantly.

I visited the doctor who carried out some tests and concluded that I have a severe form of food poisoning which still persists. He gave me anti-biotic pills and suggested rest for at least five more days along with getting hydrated.

Hence, I request you to kindly grant me sick leave for 5 more days and accept my leave for 2 days that I had to miss, which makes it from Monday, 20th September, 20XX till Monday, 27th September, 20XX. I hope to get the leave for the required days, I would be extremely obliged, madame. Thanking you. 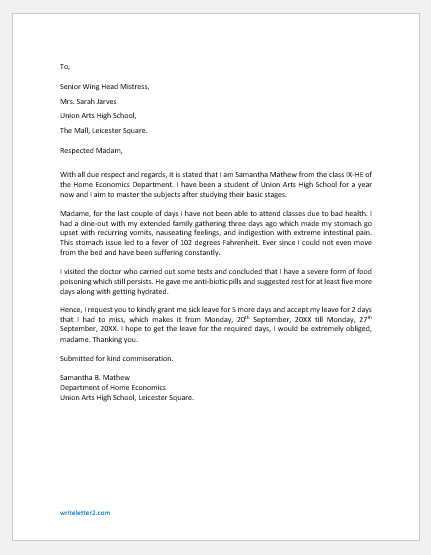 It is stated with all due respect and regards, that I am Christina Jackson from the class XI-CS of the Computer Sciences department. I have been a student of St. Ives High School for a year now and I aim to continue my further studies in the Computer Sciences field after studying its basic stages.

Madame, for the last three days I was not able to take my classes due to certain health issues I have been facing since last June. I recently lost my maternal grandfather who had raised me to a young girl after my father passed away. He had a paralytic stroke and suddenly passed away some three months ago leaving us all in extreme shock.

Ever since then, my mental health started getting worse after facing such irreplaceable loss as I was very attached to my grandfather. I had been facing the issue of insomnia and migraine which keeps on increasing over time if not catered in time. The same issue was raised three days ago and I still am unable to recover from the splitting headache.

After having a detailed checkup and a medically recommended CT scan test, I was told that I am going through chronic depression due to the shock of losing my grandfather in a sudden way. The doctor has suggested high doses of [X] that are only prescribed in severe pain, and I am suggested to have bed rest for 4 more days.

Hence, I request you to kindly grant me sick leave for 4 more days and accept my leave for three days of classes that I missed, which makes it from Monday, 24th September, 20XX till Monday, 30th September, 20XX. I hope that I would be granted the leave for the required days and would be extremely thankful to you. Submitted for kind commiseration. 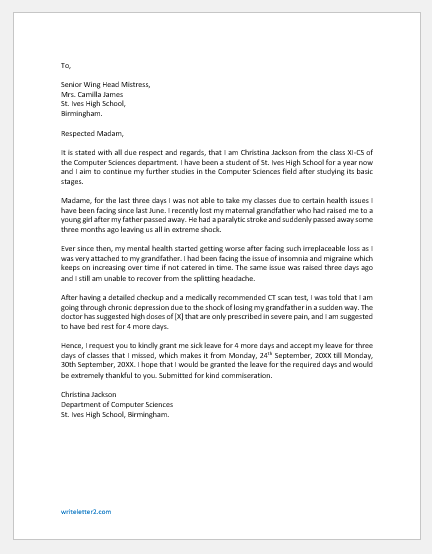