Dear Mr. Shaw, with due respect, it is stated that this letter is being written to explain my stance on the theft allegations charged on me. There have been rumors spreading about the alleged incident where I have been shown as a criminal or a thief in the company. People usually have a habit of spreading false stories against others or just believe in the half-truth that shatters the reputation of others drastically.

Sir, it is very true that I have been caught in the camera taking some papers from the office of the senior Manager’s drawers which I would not deny. It has been my constant routine to keep my old letters of my family members in UAE in those chests of drawers where other important and official files are kept safe. In a drawer near those, I kept all those letters as I felt that my letters and my diary are safer here in the officer as I live as a paying guest at a place that has toddlers that keep on messing with my things around.

Thus, after my promotion to the higher post, I shifted all my things to my new office but completely forgot to pick my personal documents and letters with me. The moment I was caught in the camera, I was merely checking my things if they were still in place.

If you still have any doubts regarding the reason I have given you, you can always check the drawers as my letters would still be there because I never got a chance to take them with me. You can also counter-check with my assistant as he knows everything about it and he will let you know the same truth that I just stated. It is hence, stated that all the theft allegations on me are completely baseless and are false.

I hope that you will believe me and will let the top management about my innocence proved in this matter. I hope my dignity and repute recover this was in the workplace now. Looking forward to your action. 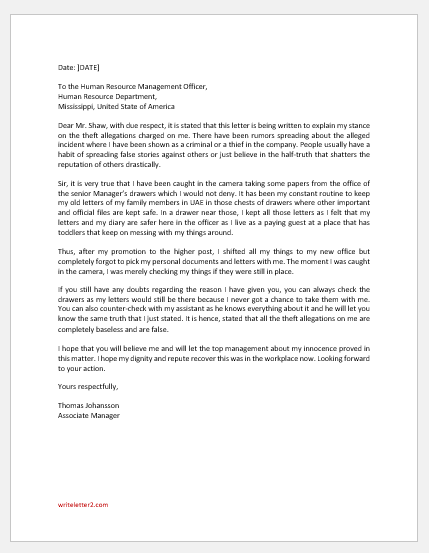 With due respect and sheer disappointment, I am writing this letter to you. I am writing to you as soon as I heard what is going on in the design department about my loyalty and code of conduct. I have heard some very illogical and false allegations of design theft in the department. This has come to me as a rather great shock, as I work with my whole dedication in designing the best and most unique designs and prints for the fabrics we manufacture. The whole department seeks suggestions and I correct the technical flaws the designs might have.

Recent days have been heavy for me as I have been facing on-job intimidation and surveillance more than in past times. Being the chief designing head of the department of design of Alinea Textiles and being an eighth years old employee in the company I simply cannot see the department being intruded and controlled by any new employee who has way less experience in the field than me.

After pinpointing unwanted suggestions and criticism in my approved designs, Ms. Amanda finds interferes in each designing decision I make as a design head which is totally affecting my productivity these days. Now she has copied my drafted design and she came up with an allegation against me that I am the one stealing her design-related creative ideas which are really ridiculous.

This is affecting my mental wellbeing and focus on my work in the workplace, in turn negatively affecting the outcomes of the company. Thus, I request you to kindly make Ms. Amanda realize that her undue interference is completely unnecessary, though she can always come up with suggesting new and creative ideas for the design, taking over my authority would actually be very unfair to me in the first place as I have been given the responsibility for this task.

I hope she gets complies and confesses the false allegations that she has spread against me. Thanking you. 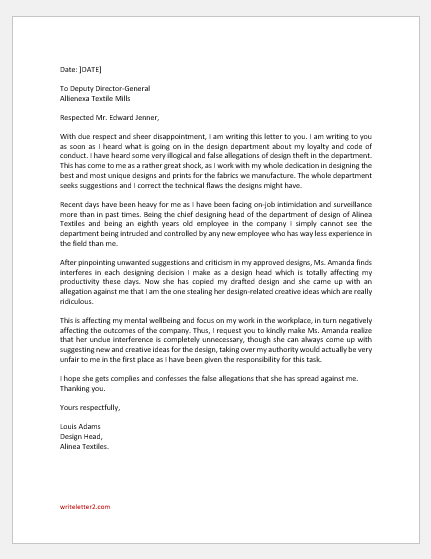